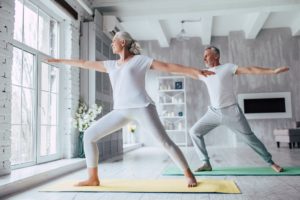 Women who are postmenopausal should engage in daily physical activity to lower their risk of fracture, according to a new study. Research from the University of Buffalo has shown that physical activity, including lighter intensity such as walking, is associated with reduced risk of hip and total fracture in postmenopausal women.

A report published in JAMA Network Open is the most comprehensive evaluation of physical activity and fracture incidence in postmenopausal women. Researchers used information from over 77,000 participants who were enrolled in the Women’s Health Initiative who were followed up over 14 years. During the follow-up, 33% of participants reported having at least one fracture.

The study showed that the women who participated in the highest amount of physical activity, which was approximately 35 minutes or more of daily activity, had an 18% lower risk of hip fracture. They also had a 6% lower risk of total fracture.

Jean Wactawski-Wende, Ph.D., study co-author and dean of the University at Buffalo School of Public Health and Health Professions said, “These findings provide evidence that fracture reduction is among the many positive attributes of regular physical activity in older women. Fracture is very common in postmenopausal women, and is associated with loss of independence, physical limitations and increased mortality.”

It is estimated that approximately 1.5 million fractures occur in U.S. women each year, which creates $12.7 billion in health care costs. Approximately 14% of these fractures are hip fractures. Mortality after a hip fracture is recorded as high as 20%.

“Modest activities, including walking, can significantly reduce the risk of fracture, which can, in turn, lower the risk of death,” Wactawski-Wende said.

Light physical activity not only includes walking but can also include non-recreational physical activity such as sweeping the floors or folding laundry. These types of activities were also inversely associated with several types of fractures.

This study is just one among many that have all used data from the Women’s Health Initiative, which have been published in the past few years to highlight the health benefits of being active. This includes levels of activity that are even lower than the current physical activity guidelines.

Osteoporosis is usually the main reason for postmenopausal women to experience a fracture. It is a condition characterized by a decrease in the density of bone, decreasing its strength and resulting in fragile bones. Bone fractures, particularly in the spine or hip, are the most serious complications of osteoporosis. Studies have shown that exercise can benefit almost everyone with osteoporosis. This explains why exercise is so important for postmenopausal women.

The main message that researchers are trying to get across to people is that every movement counts. Try to sit less, walk more, and get as much physical activity in during the day as possible.