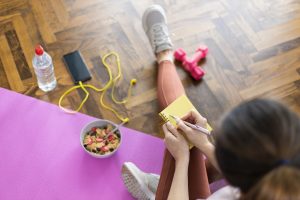 To avoid disease later in life, regular exercise and a healthy diet are essential. According to new research published in the Journal of the American Heart Association, following a simple healthy lifestyle can be the key for middle-aged adults achieving optimal cardiometabolic health later in life.

Cardiometabolic health risk factors are most noted for including metabolic syndrome. This syndrome includes a cluster of symptoms such as excess fat around the waistline, insulin resistance, and high blood pressure. Research has previously found that the presence of metabolic syndrome can increase the risk of developing heart disease, stroke, and Type 2 diabetes.

For the study, data from 2,379 participants of the Framingham Heart Study was analyzed. Participants had an average age of 47 and were 54% women. Physical activity was evaluated using a device known as an omnidirectional accelerometer. Participant’s dietary information was collected through questionnaires which measured the kinds and levels of food and nutrients consumed.

The investigation concluded that among all participants, 28% met the recommendations of both physical activity and dietary guidelines. 47% only achieved one of the recommended guidelines.

“It is noteworthy that we observed a dose-response association of adherence to diet and physical activity guidelines with risk of cardiometabolic disease later in life,” said corresponding author Vanessa Xanthakis. “Participants who met the physical activity guidelines had progressively lower risk of cardiometabolic disease as they increased adherence to the dietary guidelines.”

This study helps to outline the importance of following a healthy diet and getting regular exercise in middle age. With more research focusing on lifestyle habits to help reduce the risks of health issues such as cardiovascular disease, diabetes, and metabolic syndrome, physicians are better equipped to offer prevention suggestions to their patients.