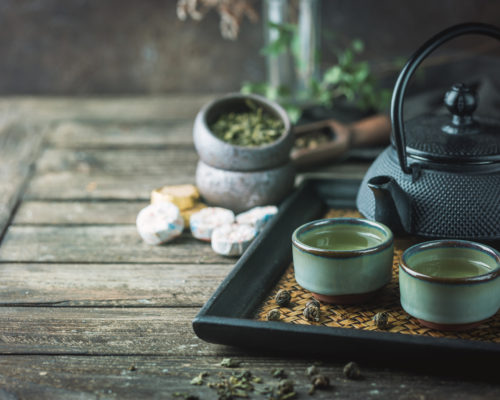 As the occurrence of diabetes grows worldwide, research must continue to find relationships between food, environment, and therapy to help those who may be diagnosed with the disease. Many people with type 2 diabetes end up with other illnesses and diseases, along with diabetes. They may tend to be more prone to circulatory diseases, cancer, dementia, and bone fractures.

Despite an increase in research towards this subject and many useful drugs, studies show that lifestyle modifications such as diet and exercise remain a cornerstone of treatment.

Bioactive Compounds in Coffee and Tea

Many studies have shown that regularly drinking green tea and coffee may benefit overall health because of the various bioactive compounds these beverages contain. Due to these positive outcomes, researchers decided to explore green tea and coffee’s effectiveness in those with diabetes.

The study included 4923 Japanese people (2790 men, 2133 women) with an average age of 66, all diagnosed with type 2 diabetes. Their health was tracked for an average of just over five years.

All participants were part of an existing study, The Fukuoka Diabetes Registry, which included looking at the effect of drug treatments and lifestyle on the lifespan of patients with type 2 diabetes. All participants were required to answer a questionnaire, which included how much green tea and coffee they consumed each day. They also provided background information on lifestyle factors, such as regular exercise, smoking, alcohol consumption, and nightly hours of sleep. Urine samples were used to check for underlying risk factors along with measurements of height, weight, and blood pressure.

By the end of the study, it was found that during the monitoring period, 309 people had died. The leading causes of death were cancer and cardiovascular disease.

While these are shocking outcomes for the consumption of tea and coffee, more research is needed to understand the biology behind these observations fully. Green tea contains several antioxidant and anti-inflammatory compounds, including phenols and theanine, as well as caffeine, and coffee contains numerous bioactive components, including phenols. The relationship between these compounds needs to be understood to fully understand the association with death risk in those with diabetes.

Caffeine is known to have potentially harmful effects on the circulatory system and is thought to alter insulin production and sensitivity. Because of this, more research is needed to understand all potential risks associated with the consumption of tea and coffee.

“This prospective cohort study demonstrated that greater consumption of green tea and coffee was significantly associated with reduced all-cause mortality: the effects may be additive,” the researchers conclude.