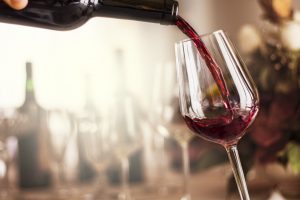 Red wine may help lower high blood pressure and protect against heart disease in people who exercise. But there’s a catch: The participants in the study were drinking non-alcoholic red wine.

The study looked at 67 men with diabetes or three or more cardiovascular risk factors. The men ate a common diet along with either consuming about 10 ounces of red wine, non-alcoholic red wine, or about three ounces of gin. All of the participants tried each diet/beverage combination over the four weeks of the study.

During the red wine phase, there were minimal changes in blood pressure noted, and no changes were seen in associated with drinking gin. Non-alcoholic red wine, on the other hand, led to decreases in blood pressure, thus reducing the risk of stroke and heart disease.

The researchers concluded that the alcohol weakens the effects of the red wine’s polyphenols and antioxidants, which can work to protect the heart.

A study found that wine can offer protective effects against cardiovascular disease, but only among people who exercise. Researcher Prof. Milos Taborsky explained, “This is the first randomized trial comparing the effects of red and white wine on markers of atherosclerosis in people at mild to moderate risk of CVD [cardiovascular disease]. We found that moderate wine drinking was only protective in people who exercised. Red and white wine produced the same results.”

There have been numerous studies supporting the notion that moderate wine consumption can offer benefits to the heart, such as raising the levels of HDL (good) cholesterol.

The study included 146 people with mild to moderate risk of cardiovascular disease. Participants were randomized to one year of moderate consumption of either red wine or white wine.

Moderate consumption of wine is defined by the World Health Organization as 0.2 L for women and 0.3 L for men, with a maximum of five beverages a week.

The researchers did not find changes in HDL cholesterol from the beginning of the study to the end, but LDL cholesterol was lower in the red wine group. Professor Taborsky added, “A rise in HDL cholesterol is the main indication of a protective effect against CVD, therefore, we can conclude that neither red or white wine had any impact on study participants as a whole. The only positive and continuous result was in the subgroup of patients who took more exercise, which means regular exercise at least twice a week, plus the wine consumption. In this group, HDL cholesterol increased, and LDL and total cholesterol decreased in the red and white wine groups. There may be some synergy between the low dose of ethyl alcohol in wine and exercise which is protective against CVD.”

“In a future study, we will compare the effects of red and white wine on markers of atherosclerosis in patients at high risk for CVD who take statins and do regular exercise. We hope to find that moderate wine consumption is safe in these patients. Our current study shows that the combination of moderate wine drinking plus regular exercise improves markers of atherosclerosis, suggesting that this combination is protective against cardiovascular disease,” he concluded.

Heart disease risk may be lowered with recreational and commuter biking: Study