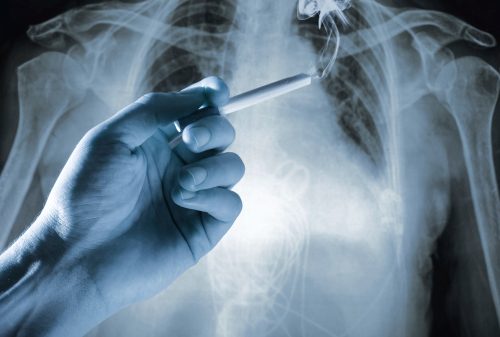 Lung cancer is the leading cause of cancer deaths among women in America, claiming more lives per year than other common cancers such as colon, prostate, ovarian, and breast cancer. The incidence of lung cancer is higher among men than women, with men’s chances of survival being lower as well. There’s much research being conducted on the subject of lung cancer, with scientists constantly looking for better treatment options and improved disease management. With this in mind, new research suggests men need more frequent lung cancer screening than women, and perhaps personalized screening strategies would optimize results.

The US Preventive Services Task Force currently recommends screening for lung cancer with low-dose computed tomography (CT) for adults aged 55 to 80 years who have a 30 pack-year smoking history and currently smoke or have quit in within the past 15 years. It was thought that less frequent screening would aid in reducing radiation exposure, but it was seen to produce varied results.

In this retrospective study, 46,766 patients who had undergone chest CT screening were monitored to determine optimal screening intervals. The researchers wanted to investigate sex differences in those who had newly developed lung cancer and to calculate the optimal CT screening times for women and men. Screening of these individuals occurred between January 2000 and February 2016. During this time, 282 patients had developed lung cancer, and of those, 186 patients were diagnosed based on the initial CT scan and excluded from the study, while 96 patients (of which 85 were men and 11 were women) had been diagnosed with lung cancer based on the subsequent CT scans and were included in the study. These 96 patients were the focus of the study in the analysis of sex differences in the lung cancer stage and pathology and the intervals of CT scan screening.

The results showed that the average time between lung cancer diagnosis on CT and the previous CT scan was significantly longer in women, compared to men (5.6 years in women versus 3.6 years in men). This was contrasted in the stage of cancer, as it was observed that 82 percent of women had their lung cancer diagnosed at an earlier stage—stage I, compared to only 49 percent in men. The pathological findings also saw some discrepancy, as solid nodules were the most common finding in men, while ground-glass opacity nodules were more common in women. There was also a difference in the type of lung cancer observed between the sexes. In men, the most common type was adenocarcinoma, followed by squamous cell, and small cell lung cancer. All female participants had adenocarcinoma.
“Because ground glass opacity nodule is the most common feature of lung cancer in women and all cases are adenocarcinoma, the growth rate of cancers might be low. Most female patients were non-smokers (82 percent), who have a lower risk of lung cancer, while 87 percent of men were smokers. We included all patients screened for lung cancer in a 17-year period, but the number of women patients was low and further studies are needed to confirm the sex differences we found,” said lead author Dr. Mi-Young Kim, a radiologist at Asan Medical Center in Seoul, Korea.

These findings suggest that the presentation as well as pathology of lung cancer is not the same in men and women, and that the current annual screening recommendations for women may be too frequent, with scans every two to three years being more suitable. This will reduce the number of unnecessary CT scans and decrease radiation exposure. A gender-based screening protocol for lung cancer is something the researchers and contributors to the study would like to see implemented.

Differences in lung cancer development found in smokers and non-smokers