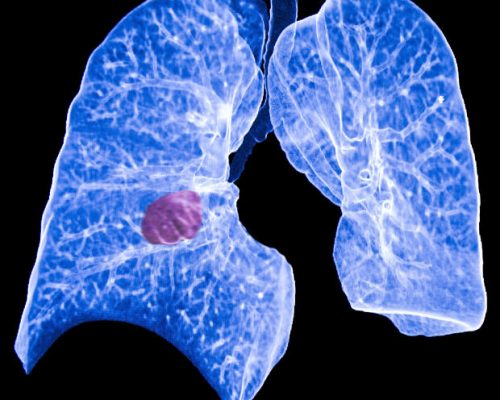 Researchers from Boston University have found that a nasal swab may help aid physicians in confirming a lung cancer diagnosis. While the swab itself is not enough to detect the presence of cancerous cells and make a concrete diagnosis, when used in conjunction with other diagnostic methods—like a CT scan—it has proven effective in confirming doctors’ hypotheses.

Lung cancer is one of the deadliest forms of the chronic disease as it is often identified too late, rendering most treatments less effective. Researchers hope that the identification of new diagnostic methods will rectify this and allow for the disease to be identified sooner.

The nasal swab works by pinpointing specific biomarkers in the nasal passage that can reveal whether a lesion of the lung that has been spotted using a CT scan or other imaging technique is cancerous.

Co-author of the study, Marc Lenburg, explained: “Nasal gene expression [production] contains information about the presence of cancer…” He posits that implementing the use of a nasal swab in the diagnostic process could help detect lung cancer in a less invasive way.

Currently, doctors make use of more expensive and potentially risky diagnostic methods, such as lung biopsies, and while a nasal swab may not be an alternative to this procedure, it could lessen its necessity in some cases.
The study looked at patients who were either current or former smokers from 28 medical centers across North America and Europe. Researchers took nasal swabs from participants and were able to identify a genetic pattern involving 30 genes whose activity changed when lung cancer was present.

A pulmonary specialist at Lenox Hill Hospital in New York City, Dr. Len Horovitz, commented on the efficacy of using DNA biomarkers in diagnosing cancers: “Genomic markers have come to the forefront as a determinant for diagnosing cancer. This test may help avoid unnecessary procedures in the diagnosis of lung cancer. This is certainly easier than [more invasive tests such as] a bronchial swab or bronchoscopy and may be as helpful at suggesting the presence or absence of lung cancer.”

While this test may provide a less invasive option for diagnosing lung cancer, it does have its limitations as its effectiveness depends on the location of the lesion that is found. However, these genetic biomarkers open the door for further testing of less invasive diagnostic tools that could one day make identifying lung cancer easier and allow doctors to catch it before it becomes too severe.

Differences in lung cancer development found in smokers and non-smokers