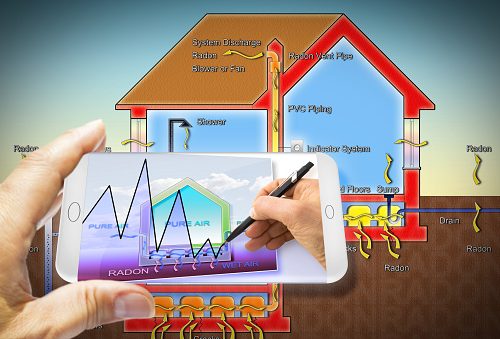 When we think of lung cancer, cigarettes are likely the first cause that comes to mind. When thinking of skin cancer, excess sun exposure is the equivalent. But what if I told you that there was a substance that leaks into our homes that can cause both? A naturally occurring radioactive gas called radon has now been linked to developing malignant skin cancer.

Many people may not be aware of radon, but it has been unequivocally linked to the development of lung cancer for some time now. It is produced by the decay of uranium found in soil, rock, and water. The gas is colorless, odorless, and tasteless. Radon can move freely through soil, enabling it to escape into the atmosphere and even into people’s homes.

Radon gas is so hazardous to our lungs that it is one of the leading causes of lung cancer today, second only to smoking. This risk increases significantly if a cigarette smoker is exposed to this radioactive gas as well.

Unlike smoking, occasional radon gas exposure does not produce any symptoms such as coughing or headaches.

Radon is the number one causes of lung cancer among non-smokers. It is responsible for about 21,000 lung cancer deaths each year—2,900 of those deaths occur in people who never smoked.

Radon gas can be found throughout the United States. It can seep into buildings, homes, offices, and schools, resulting in indoor radon levels being excessively high.

“Our study shows that, when radon decays, radioactive alpha particles not only destroy lung tissue but can also affect the skin. This has rarely been researched in the past,” says Martin Röösli, professor of environmental epidemiology at Swiss TPH.

The study in question complied data from 1,900 deaths due to malignant melanoma occurring in Switzerland between 2000 and 2008. Subjects were of the age of 20 and above.

“The younger the individual is, the greater the impact of radon on the risk of developing the disease,” explains Röösli

If contracting lung cancer wasn’t scary enough, this new discovery surely makes the natural gas scarier. It is important to prevent radon from getting into your homes by sealing floors and walls, improving ventilation, and using radon detection tests that can be easily bought at any hardware or department store.