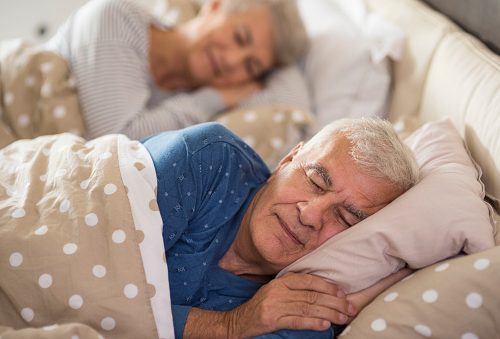 Getting older comes with many luxuries such as retirement, spending more time with family, and even allowing the opportunity to see the world. However, as we age, our sleep is one thing that often suffers. A lack of restorative sleep has been seen to promote mental and physical ailments in our seniors and even elevate their risk of memory loss.

“Nearly every disease killing us in later life has a causal link to lack of sleep,” said the article’s senior author, Matthew Walker, a UC Berkeley professor of psychology and neuroscience. “We’ve done a good job of extending life span, but a poor job of extending our health span. We now see sleep, and improving sleep, as a new pathway for helping remedy that.”

Individuals of advanced age are less likely to notice or report sleep deprivation symptoms such as mental fatigue than their younger counterparts, despite numerous brain studies in this older population demonstrating that poor sleep leaves them cognitively worse off. This lack of restorative sleep has been linked to conditions like Alzheimer’s disease, heart disease, obesity, diabetes, and stroke.

The authors state that sleeping pills do nothing to help restore this type of sleep, as the pills put you in a form of sedation and not sleep. Pills designed by pharmaceutical companies are a poor substitute for the natural sleep cycle that is vital for normal brain function. This may be due to sleeping pills not allowing for normal brainwave patterns to occur during sleep that would normally trigger the restorative sleep wave phase. Additionally, according to the research gathered during the sleep study, aging brains already have a hard time generating the kind of slow brain waves needed to promote deep curative sleep in addition to the neurochemicals that aid in the smooth transition from sleep to wakefulness.
The authors stress, however, that not all seniors are affected by these changes to brain physiology, just that it occurs in some people more than others as they age. But they do express a need to promote alternatives to prescription and over-the-counter sleep aids, however challenging that may be.

“The American College of Physicians has acknowledged that sleeping pills should not be the first-line kneejerk response to sleep problems,” Walker said. “Sleeping pills sedate the brain, rather than help it sleep naturally. We must find better treatments for restoring healthy sleep in older adults, and that is now one of our dedicated research missions.”

We often promote quantity of sleep rather than obtaining quality sleep, leading to the rise of sleep aids and sedatives. The authors of the study believe that a balance of quality and quantity of sleep hours needs much more appreciation than it currently receives and that the importance of sleep is often understated.

6 tips to sleep better at night