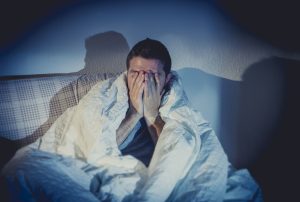 PTSD-related nightmare treatment may be effective with blood pressure drugs. For the study, the researchers investigated 12 prazosin studies, of which four were randomized controlled trials.

Principal investigator of the study Simon Kung explained, “The studies showed the drug was well-tolerated and can take effect rapidly, within days to weeks, and some patients reported a return of nightmares when the course of prazosin was stopped. There’s not much available for treating nightmares in terms of medications, so prazosin is a promising option.”

“Because of the low side effects of prazosin as reported in these studies, it seems logical to extend the use of prazosin to non-PTSD nightmares,” Dr. Kung added.

Nightmares is a distressing symptom of PTSD that can actually ruin one’s sleep with frightening images of physical or emotional threats. Nightmares can be so severe the person may choose unhealthy means such as alcohol or drugs as a coping method.

One cause of nightmares in PTSD is the development of the overstimulated chemical messenger norepinephrine receptors in the central nervous system.

Dr. King continued, “The thinking is that pharmacologic agents, like prazosin, that block these receptors may be ideal in treating nightmares.”

Prazosin is a hypertension drug that is often used by veterans to treat PTSD-related nightmares.

Nightmares can be distressing and disrupt sleep. As sleep is an integral part of overall health, lack of adequate shuteye can lead to other health consequences, including heart problems and mental illness.

Unfortunately, many PTSD patients turn to alcohol or drugs for managing their nightmares, but this can contribute to worsened health outcomes.
Approaches to treating nightmares in PTSD are similar to that of treating PTSD as a whole. This means looking deeper into the underlying cause and targeting it.

The primary treatment is psychotherapy, often combined with medication. But prescription drugs are toxins in the system, setting you up for dependency and harmful side effects. You want to improve your symptoms, feel better about yourself, and learn ways to cope if symptoms arise again, of course, but there is a natural approach to consider.

Cognitive therapy: This type of talk therapy helps you recognize the ways of thinking (cognitive patterns) that are keeping you stuck — for example, negative or inaccurate ways of perceiving normal situations. For PTSD, cognitive therapy often is used along with exposure therapy.

Exposure therapy: This behavioral therapy helps you safely face what you find frightening, so that you can learn to cope with it effectively. One approach to exposure therapy uses “virtual reality” programs that allow you to re-enter the setting in which you experienced trauma.

Eye movement desensitization and reprocessing (EMDR): EMDR combines exposure therapy with a series of guided eye movements that help you process traumatic memories and change how you react to them.

A healthy diet of fresh, whole foods can help calm the nervous system and boost your immunity.

Working with a team of professionals who are skilled in treating PTSD can help you achieve better and improved sleep by improving and minimizing nightmares.