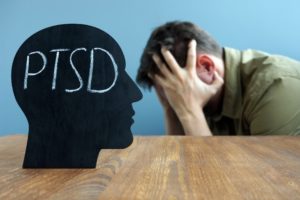 Young adults who have been diagnosed with post-traumatic stress disorder (PTSD) may have a stroke by the time they are middle-aged, according to a new study. A team of researchers working with U.S. veterans has made this connection between risk of early stroke and PTSD.

Severe emotional distress takes a toll on the body and can change day-to-day behavior. Stress can produce physiological changes that cause heart disease, hypertension, diabetes, chronic inflammation, high cholesterol, and cerebrovascular disease, all of which are well-established stroke risk factors.

The study from the University of North Carolina School of Medicine followed almost one million young and middle-aged veterans who served in Iraq and Afghanistan for more than a decade. All participants were 30 years old, on average, and had no history of stroke. 29% of the participants had been diagnosed with PTSD.

The research showed that during the study, 766 participants had a transient ischemic attack. This is also known as a brief “mini-stroke.” Another 1,877 people had a stroke. Of these cases, veterans with PTSD were 61% more likely than others to have a mini-stroke and 36% were more likely to have a stroke.

“This trend is very concerning given the devastating impact stroke has on young patients and their families, many of whom struggle to cope with long-term disability, depression, and economic loss during their most productive years,” said study leader Lindsey Rosman of the University of North Carolina School of Medicine in Chapel Hill.

“Because PTSD is a potentially treatable psychological condition, understanding the relationship between the two conditions may have important implications for improving stroke prevention and treatment in young and middle-aged adults,” Rosman added.

A stroke occurs when a clot blocks an artery carrying blood to the brain. This is known as an ischemic stroke. About 10% to 14% of ischemic strokes occur in adults aged 18 to 45.

While other studies have shown that PTSD does increase the risk of heart disease and stroke in older adults, this is the first to show a link between trauma-induced stress disorders and the risk of stroke and mini-strokes in young and middle-aged adults.

While the main reason is not known for the connection between PTSD and stroke, it is thought that unhealthy lifestyle habits can contribute to it. Trauma victims often turn to an unhealthy lifestyle as a means of self-medicating to escape emotional distress. This can include overeating, anger, drinking, smoking, and drug use—all of which have been proven to cause a stroke.

Another reason that trauma and PTSD contribute to stroke risk is that extreme stress and PTSD induce the same biochemical changes that cause stroke damage in the brain, including the release of bodily toxins and oxidative stress.

This study will help to outline the possible health risks to veterans that suffer from PTSD. Although there have been many studies about psychological stress and trauma, there is a great importance for more studies to show connections between individuals who have suffered horrific life incidents and the long-term impact on well-being and health.