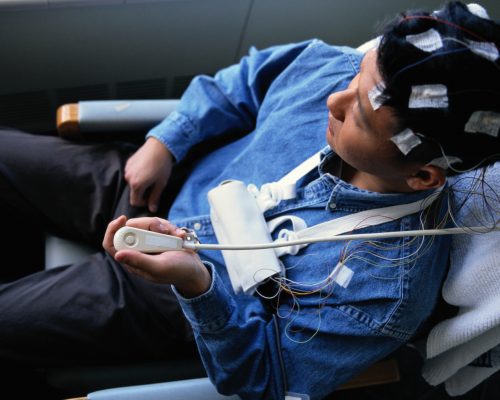 Post-traumatic stress disorder (PTSD) may be eased with wearable electrical patches. These patches jolt the brain in patients while they are asleep and can offer relief from the effects of PTSD.

Iraq war veteran and PTSD sufferer Ron Ramirez tested the patches and believes that they are beneficial in treating PTSD. He explained his story, “About a year later, they figured out that I had a brain injury. I had no motivation, I had constant nightmares, and I couldn’t sleep. And I would get very irritated by other people, getting into altercations, sometimes even with other patients. I couldn’t even take my two daughters out on my own without an escort.”

Ramirez was given all the traditional treatment options currently available for PTSD, from cognitive behavioral therapy to medications. Unfortunately, Ramirez did not experience much relief from PTSD treatment based on traditional methods.

The new wearable electrical patch, known as trigeminal nerve stimulation (TNS), is still in the experimental phase, but it is offering hope for PTSD sufferers that they may finally achieve relief.

Senior study author Dr. Andrew Leuchter explained, “TNS is a new approach to PTSD. The challenge is that despite offering the best treatments that we can, most PTSD patients are left, sometimes for decades, with significant residual symptoms, like anxiety, irritability, explosive outbursts, and sleep difficulty, not to mention depression.”

“But with TNS, we approach the brain by thinking of it as a large network. And like any electrical network, it’s sensitive to any energy that gets put into it. So, with TNS, we pulse the brain with an external source of energy through the trigeminal nerve,” he added.
TNS was developed by researchers at UCLA in order to better help those 3.5 percent of patients with PTSD from rape, car accidents, and other traumas, and the 17 to 30 percent of active and served veterans.

The treatment uses a nine-volt battery, which sends out low current zaps to the brain while a person is sleeping. The electrical pulses target a part of the nervous system responsible for mood, behavior, and thought.

Twelve civilian patients with PTSD and depression were given TNS for eight hours a night for eight weeks.

An additional follow-up experiment is scheduled for the future and will involve close to 74 veterans.