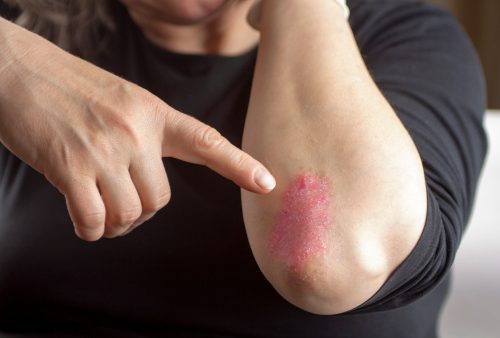 Dr. Mehta suggests that people do not merely look at psoriasis as a cosmetic skin condition, but rather a condition which can still very much impact the body as a whole. With that in mind, researchers still say they merely found an association and not a cause and effect. The researchers wish to further their studies and determine if treating psoriasis will lower blood vessel inflammation.

Psoriasis affects three percent of the U.S. population. As a skin condition, sufferers may be embarrassed to wear t-shirts or shorts, and they may refuse to be outdoors in social settings. Psoriasis occurs when the skin cells grow too quickly, causing the skin to become thick, white or red in patches.

Mehta suggests that if psoriasis suffers want to lower their risk of heart disease and stroke, they should also partake in healthy heart lifestyle habits. “Avoid smoking, try to maintain a healthy lifestyle, including moderate exercise and a balanced diet. You should also have your blood pressure, cholesterol and blood sugar checked. Try to do that, because psoriasis itself might be a risk factor,” Dr. Mehta added.

Findings were uncovered by comparing 60 adults with psoriases to 20 adults without. All participants had a low risk of heart disease at the beginning of the study. Researchers found that it didn’t matter if psoriasis cases were mild or severe, scans still revealed increased inflammation in the blood vessels. In the worst cases, psoriasis was associated with a 41 percent increase in blood vessel inflammation.

Michael Siegel from the National Psoriasis Foundation added, “Even mild psoriasis carries a risk for heart problems. There are systemic consequences to psoriasis and people with severe disease need to seek the most effective treatment possible.”

The findings were published in Arteriosclerosis.