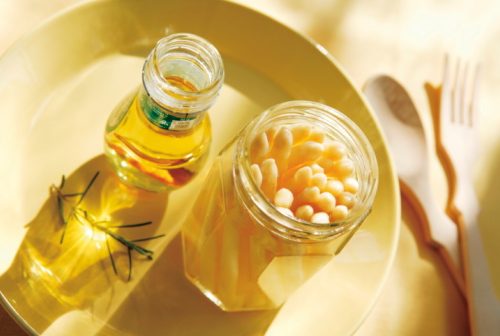 Over the last two decades, a variety of health benefits have been linked to the Mediterranean diet, and new findings suggest that one of the primary ingredients of the diet, extra-virgin olive oil, can protect against cognitive decline.

The Mediterranean diet, which is described as being full of fresh fruits, vegetables, and olive oil, has long been touted as heart healthy, a reducer of inflammation, and a way to help ward off type 2 diabetes. Now, researchers believe that they have discovered that extra-virgin olive oil protects memory and learning ability and reduces the formation of amyloid beta plaques, as well as neurofibrillary tangles. Amyloid beta plaques and neurofibrillary tangles in the brain are considered “classic markers” of Alzheimer’s disease.

Memory and learning ability tests were conducted at both the nine- and 12-month marks. As it turns out, the mice that consumed olive oil did much better on the tests than the mice that were fed regular chow. Upon examining the brain tissue of the mice, researchers found that the brain cells in the olive oil group were healthier. In fact, amyloid plaques were reduced in the olive oil group and so were levels of phosphorylated tau, the substance responsible for neurofibrillary tangles. It is these tangles that interrupt brain cell function in people who suffer from dementia-related disease, such as Alzheimer’s.

The researchers have reported that they believe the olive oil leads to “nerve cell autophagy activation,” which is a process that can destroy amyloid plaques and phosphorylated tau before they have an opportunity to build up in the brain.

Currently, olive oil is getting a lot of attention in the medical community. This is due to the fact that a number of studies have shown it is an ingredient worth considering when it comes to the brain. For instance, recently a research team in the U.K. announced that they’ve discovered the main fatty acid in olive oil inhibits the activity of a certain cell protein that prevents the suppression of brain tumors.


Can we say for certain that extra-virgin olive oil is an ingredient for protecting memory? Well, not just yet. The memory and learning study conducted at Temple University has to be repeated with humans. Still, the researchers who used the mouse model are encouraged. In a news statement, they called their findings “a very important discovery” since a reduction in autophagy seems to mark the beginning of Alzheimer’s disease.

With more and more evidence suggesting olive oil has health benefits, many nutritionists and medical experts agree that it certainly can’t hurt to consume more of it. A few years ago, the Food and Drug Administration (FDA) announced that there is some evidence to suggest that taking 2 tablespoons of olive oil daily is good for you. They pointed out that the oil should replace a similar amount of saturated fat and not increase the total number of calories you eat in a single day.