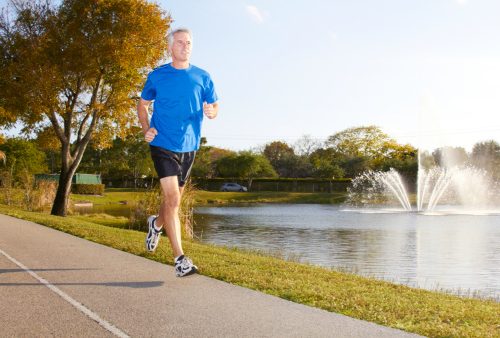 Prostate cancer survival rates may be boosted with regular exercise, research shows. The American Cancer Society study looked at over 10,000 men diagnosed with prostate cancer. The men provided information about their activity levels prior to and after diagnosis.

The researchers found that men with the highest levels of exercise prior to their diagnosis had a 30 percent reduction in death due to prostate cancer, compared to men who exercised the least. Furthermore, the amount of exercise was found to be directly proportional to the scope of benefits received. The researchers also found that even after diagnosis, men with the greatest exercise levels had a 34 percent reduction in death, compared to those with little to no exercise.
Lead researcher Ying Wang explained, “Our results support evidence that prostate cancer survivors should adhere to physical activity guidelines, and suggest that physicians should consider promoting a physically active lifestyle to their prostate cancer patients.”

Wang added, “The American Cancer Society recommends adults engage in a minimum of 150 minutes of moderate or 75 minutes of vigorous physical activity per week. These results indicate that following these guidelines might be associated with better prognosis.”

Wang concluded that additional research is required to determine whether these results vary between patients based on age at diagnosis, smoking, and body weight.