Home » Health News » Presenteeism: The reasons why we go into work sick 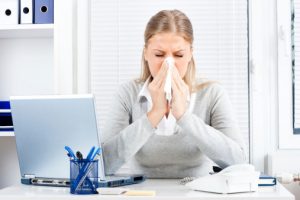 We’ve all done it: gone to work even though we feel horrible and will probably not get anything done. Even though we hate it when a co-worker comes in sick, and we understand that we won’t get better if we head into work sick, we still continue to do.

Researchers from the University of East Anglia (UEA) have uncovered the primary reasons why we still go to work when we are sick, including high job-demand, job stress and job insecurity.

The research aims to show employers the growing trend of presenteeism – going to work while sick – and what can be done to help boost an employee’s health and productivity.

The researchers found that presenteeism stems from ill health, stress, and raised motivation. This may have employees going that “extra mile,” which not only makes them work more intensely, but even head into work when they are sick.

The strongest link to presenteeism is the severity of organizational policies used to monitor or reduce staff absences. Examples of this are limited paid sick days, job insecurity and taking disciplinary action.

Previous research on presenteeism showed that it has negative and positive effects on employee productivity and welfare. Presenteeism is linked with an increase in errors, productivity loss and lower performance. In the UK, presenteeism cost the medical system £15.1 billion a year just for mental health.

Lead author, Dr. Mariella Miraglia, said, “This study sheds light on the controversial act of presenteeism, uncovering both positive and negative underlying processes. It demonstrates that presenteeism is associated with work features and personal characteristics and not only dictated by medical conditions, in contrast to the main perspective of occupational medicine and epidemiology.”

“Working while ill can compound the effects of the initial illness and result in negative job attitudes and withdrawal from work. However, the possible negative consequences of being absent can prompt employees to show up ill or to return to work when not totally recovered. Organizations may want to carefully review attendance policies for features which could decrease absence at the cost of increased presenteeism,” she added.

To reach their findings researchers examined data from 175,960 participants from 61 previous studies. Dr. Miraglia developed a system to uncover the significant causes of presenteeism and absenteeism. Key reasons for a person to head into work while sick involved job demands such as under-staffing, workload and finances. It was also linked to conflict between work and family, being exposed to harassment, abuse and discrimination in the workplace.

Individuals who worked in a supportive environment felt they did not have to attend work if they were sick. Optimism, too, was also linked with presenteeism where having a positive outlook increased the willingness to go into work while sick.

Dr. Miraglia explained, “Because presenteeism is more predictable than absenteeism, it is easy to modify by management actions. Workplace wellness and health programs may be desirable to reduce stress and work-related illness. Furthermore, although increasing job resources, such as job control and colleague, supervisor, and organizational support, can be helpful in tackling presenteeism through their positive impact on health, our results suggest that controlling job demands represents a key line of defense against the behavior.”

She continued by saying, “Organisations may benefit from well-designed jobs that limit the level of demands to which employees are exposed to every day, for example, by reducing excessive workload, time pressure and overtime work, as well as making sure they have the resources they need.”

Dr. Miraglia says further research is required to determine when going into work sick is actually positive. She concluded, “It could be a good thing for some people, a way of integrating back into work again. But it would depend how much the individual and organization wanted it and were prepared to be flexible, for example, by modifying job descriptions or offering flexy time.”

The findings were published in the Journal of Occupational Health Psychology.