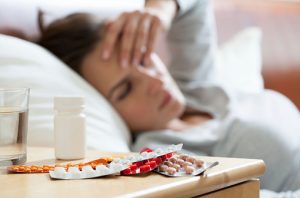 Commonly used and prescribed pain relievers could increase your risk of heart attack if they are taken while you have a cold or flu-like sickness. Non-steroidal anti-inflammatory drugs, or NSAIDs, can be prescribed to reduce the symptoms associated with acute respiratory infections, but the findings of a recent study show that using these medications while you have a respiratory infection may also increase your chance of having a heart attack.

Researchers reviewed claims from Taiwan’s National Health Insurance Program submitted over seven years, from 2005–2011, and examined whether two cardiac risk factors could have a combined effect on heart health. The risk factors investigated were having an acute respiratory infection such as a cold or flu, and the use of NSAIDs. After comparing patients’ heart attack risk over time, over episodes of combined NSAID use and respiratory infection, the team found a stronger association with heart attacks occurring when both factors were present as opposed to the presence of just one or neither.

In comparison to when no factors were present, the risk of heart attack increased 3.4 times when a patient had a respiratory illness and was taking NSAIDs, and increased 7.2 times if the medication was given intravenously. Similarly, but less significantly, the risk of heart attack also increased when the risk factors were present alone, with the risk increasing 1.5 times for those who just took the NSAIDs and 2.7 times for those who were just experiencing a respiratory illness.

These results suggest that multiple risk factors may have a combined effect on the likelihood of a patient experiencing a heart attack.
Lead author of the study, Dr. Cheng-Chung Fang of the National Taiwan University Hospital, addressed these results, cautioning doctors and stating “Physicians should be aware that the use of NSAIDs during an acute respiratory infection might further increase the risk of heart-attack.” He also suggested that those who are looking for relief of cold and flu symptoms should consult with their doctor or pharmacist before taking any medications so as not to inadvertently increase their risk of suffering a cardiac event.

While a direct cause and effect relationship was not proven between the use of NSAIDs, acute respiratory illness, and heart attacks, a significant association was found. Further research is required to prove causality between these factors and an increased risk of cardiac events.

Aches and pains not worsened by weather: Study