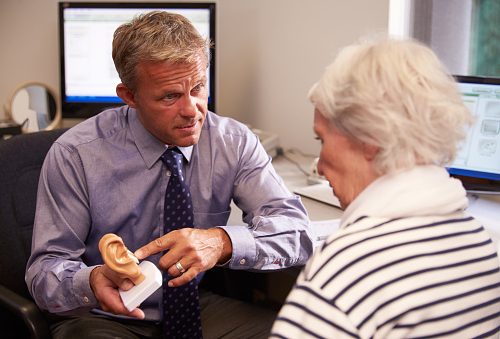 Presbycusis (age-related hearing loss) genetic biomarker has been identified by researchers. The research findings offer a breakthrough for better understanding the condition and a possible prevention. Presbycusis affects an estimated 30 million Americans and greatly impacts patient’s quality of life.

Over the nine-year study, researchers from the University of South Florida’s Global Center of Hearing and Speech Research collaborated with the National Technical Institute for the Deaf to identify a genetic biomarker for age-related hearing loss. The genetic mutation in those with age-related hearing loss was found to be linked to speech processing abilities.

The researchers found the gene coding for the production of a protein in the cochlea (inner ear) known as glutamate receptor metabotropic 7 (GRM7). This protein is involved in converting sound into code for the nervous system. The code is then sent to the brain for processing.

Researcher Robert Frisina Jr. said, “This gene is the first genetic biomarker for human age-related hearing loss, meaning, if you had certain configurations of this gene, you would know that you are probably going to lose your hearing faster than someone who might have another configuration.”

“Age-related hearing loss is a very prevalent problem in our society. It costs billions of dollars every year to manage and deal with it. It’s right up there with heart disease and arthritis as far as being one of the top three chronic medical conditions of the aged,” he added.

The researchers also found the gene mutation yields different results in men and women. The variation negatively impacted men, but had the opposite effect for women. In fact, women with this gene mutation experienced better than average hearing in their older years.

There are six main types of presbycusis:

Sensory: This refers to the loss of the outer hair cells in the Corti (part of the cochlea that responds to sound vibrations by making nerve impulses). This type of presbycusis applies to high-frequency sounds, so the ability to understand speech generally remains intact. Sensory presbycusis is slow to progress and begins at mid-life.

Neural: This is atrophy of the nerve cells in the cochlea and auditory pathways to the brain. Neural presbycusis is defined as the loss of over 50 percent of cochlear neurons. This type of hearing loss is more noticeable in older age, characterized by severely impaired ability to understand speech.

Metabolic (stria): This is atrophy of the stria vascularis, which provides blood supply to the inner ear and maintains the chemical and bioelectric balance in the cochlea. This type of presbycusis normally takes place during the last few decades of life and is progressing slowly.

Mechanical (cochlear conductive): This is a degenerative thickening and stiffening of the basilar membrane of the cochlea. Ability to hear speech is comparable to one’s level of hearing loss.

Mixed: Refers to a combination of different types of age-related hearing loss as mentioned above.

Indeterminate: None of the listed characteristics are present (about 25 percent of cases).