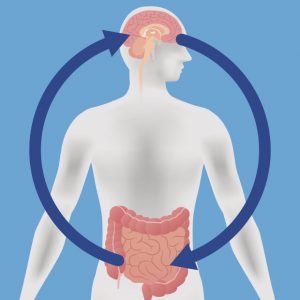 While the benefits of probiotics have been widely touted—encouraging people to consume yogurts and kefir in order to get their dose of good bacteria—new research has found that another form of gut-health agent, prebiotics, can also improve your overall health and well-being.

Prebiotics function as food for healthy gut bacteria and have been found to help improve sleep quality and reduce the physiological effects of stress. Prebiotics are considered dietary fibers and are found naturally in foods like chicory, artichokes, raw garlic, leeks, and onions. They aid in brain health, as when they are digested by good bacteria, these bacteria multiply and create metabolic byproducts that some research has linked to brain function.

To test the effects of prebiotics, researchers utilized three-week-old male rats and split them into two groups. The first was fed their standard rat food, while the second received the same food in addition to prebiotics. Using brain activity testing, the team monitored the rats’ body temperatures, gut bacteria, and sleep-wake cycles, and discovered that those who consumed the prebiotics spent more time in NREM, or non-rapid eye movement sleep, than their counterparts.

NREM sleep is restorative, and the authors explained its benefit: “Given that sufficient NREM sleep and proper nutrition can impact brain development and function and that sleep problems are common in early life, it is possible that a diet rich in prebiotics started in early life could help improve sleep, support the gut microbiota and promote optimal brain/psychological health.”
Researchers also evaluated the effect that a prebiotic diet had on stress, assessing the same factors after the rats were subjected to a stressor. Those who were on the prebiotic diet spent more time in REM or rapid eye movement sleep, which is linked to better recovery from stress.

Some research has even demonstrated that those who get more REM sleep after trauma are less likely to suffer from post-traumatic stress disorder. Stress can also negatively affect gut bacteria and suppress normal body temperature fluctuations, but the rats that consumed prebiotics were found to maintain their gut bacteria and normal temperature fluctuations, suggesting that the prebiotics helped to defend the body from physiological impacts caused by stress.

While researchers maintain that it is too early to implement a prebiotic supplement as a sleep aid, they assert that adding natural sources into your diet will not cause you any harm and may even allow you to experience some of the benefits seen in the animal trials.