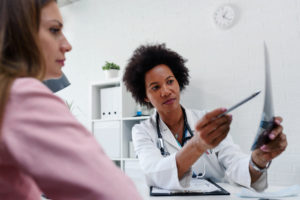 The study published in the Journal of the American Heart Association used data from the Discharge Educational Strategies for Reduction of Vascular Events (DESERVE) study. This was a randomized controlled trial of 552 stroke patients from four New York City hospitals. Researchers examined the link between positive health beliefs and blood pressure reduction in patients one year following a stroke.

The follow-up with patients included assessing their blood pressure. Researchers found that those who believed they could protect themselves from having a stroke had a 5.6 mm Hg greater reduction in blood pressure than those who did not.

Female stroke survivors with positive beliefs were especially found to have lower blood pressure a year later compared to men who did not have the same results. On average, female patients who did not feel they could protect themselves from having another stroke had a slight increase in blood pressure.

“In this study, we found an association between self-efficacy and reduced blood pressure, which is consistent with previous studies linking positive psychological states to better health outcomes in the context of cardiovascular disease and stroke,” said Emily Goldmann, clinical assistant professor of epidemiology at NYU School of Global Public Health and the study’s lead author. “Targeted strategies to improve health beliefs after stroke may be an important component to include in risk factor management among stroke survivors.”

High blood pressure affects 103 million adults in America and it is strongly associated with an increased risk of stroke, including the risk of having a second stroke. Therefore, many health care professionals agree keeping blood pressure under control is one the best ways to reduce their risk of a second stroke. Blood pressure can be modified through lifestyle changes or medication, but many adults have difficulty controlling it.

Many doctors recommend a positive lifestyle change to include positive thinking, meditation, a healthy diet, and plenty of exercise. Limiting processed foods and alcohol, cutting down on sodium, and eating plenty of fruits and vegetables is essential to having a heart-healthy diet. Regular aerobic exercise is also recommended for those trying to keep blood pressure under control.

This study helps to show the importance of positive beliefs about one’s health, and how the old saying “mind over matter” may have some truth to it. As this study shows, women who stay positive about their health tend to have a lower risk of high blood pressure, which is essential in those trying to avoid having a second stroke.