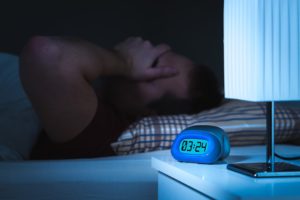 Poor sleep quality is a major health issue for many older adults. It can be caused by age-related increases in chronic health conditions, sleep behavior changes, medications, and other issues. Insomnia and other sleep disturbance issues have been shown to affect around one-third of older adults.

Peptic acid is a condition when sores develop on the lining of the stomach or in the first part of the small intestine. They are often a result of the presence of a bacterium known as Helicobacter pylori (H. pylori) in the gut. However, due to an increase in treatments for H. pylori infections, the rate of recurrent peptic ulcers has dropped dramatically. It has now been shown that those who still suffer from recurrent ulcers are not normally infected with H. pylori, therefore showing another cause is to blame.

The Link between Sleep and Ulcers

This is what led a team of researchers to design a study to test their hypothesis that other factors besides the bacteria could cause peptic ulcer recurrence, including poor sleep. The results of the study were published in the Journal of the American Geriatrics Society.

For the study, 1,689 participants who suffered from H. pylori peptic ulcer disease were enrolled in a 10-day course of anti-H. pylori treatment. This was followed up by a four-week anti-ulcer therapy. Four weeks after the treatment was finished, patients were examined to check if their ulcers had healed.

Researchers found that of the 1,538 patients that had eradicated H. pylori, the peptic ulcers had also healed. The participants were then also enrolled in a follow-up sleep study where they wore monitors that provided information about the length and quality of their sleep.

Overall, 1,420 participants completed the follow-up sleep study. They were an average age of 69 years old and had normal body weight. It was shown that those who experienced a recurrence of their peptic ulcer where also the participants who had higher rates of diabetes, heart disease, and excessive alcohol consumption. They also took longer to fall asleep, woke during the night, and rated their sleep as poor compared to the participants who didn’t have a recurrence of ulcers.

The researchers of the study concluded that poor sleep quality does contribute to the recurrence of peptic ulcers. These findings only go to show how important it is to properly treat and prevent sleep problems in older adults who suffer from previous H pylori-infected peptic ulcers.