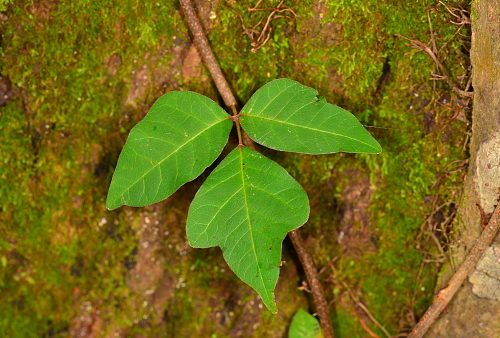 Poison ivy is a plant that can cause an uncomfortable and unsightly rash, but it’s important to know that poison ivy rash affects some people more than others due to poor handling and that poison ivy treatment will go a long way in easing rash symptoms.

Watch out for the “leaves of three” – that is how you best describe poison ivy. Poison ivy never has more than three leaves on each stem. If you see 5 or 7 leaves, you are not looking at poison ivy. Also, despite popular belief, poison ivy is not always green; like many plants, it turns red or purple in the fall.

Poison ivy is actually a pretty looking plant, but don’t let it fool you. It is strong and nasty. It clings to tree trunks and other surfaces with hair-like roots that grow from the stem. When climbing surfaces aren’t nearby, the ivy will grow as a freestanding little shrub.

Poison ivy rash is caused by an allergic reaction to an oily coating that covers the leaves. You don’t have to come in direct contact with leaves, root or stems to get the rash, you can get poison ivy rash from contaminated clothing. Just to show how hearty the plants are, in winter the leafless stems and vines can still carry the oil and cause the skin rash.

Poison ivy affects some people more than others

Research out of NYU School of Medicine suggests that the poison ivy rash is becoming more common. Experts involved in the study blame climate change – warmer temperatures and carbon dioxide increasing. They believe it promotes bigger growth of the leaves and supercharges the oil on the leaves, thus making it stronger. Penn State dermatologist, David Adams calls this nonsense. He says he hasn’t seen much change in the number of patients suffering from poison ivy over the last 15 years. He does admit the severity can vary, but insists there is an easy explanation for that.

Adams says you can’t only get poison ivy from brushing against its leaves. He contends that breaking the leaves, stem or root can cause the “urushoil oil” to spread all over your skin. This can lead to serious cases of poison ivy rash. One example is when people get Christmas trees and there are dead ivy vines on it that they rip off.  In some cases, people may not know the vines are there and the oil on those vines is not visible. The oil can spread and remain on objects for a long period of time. Sometimes, doctors have come across poison ivy rash after a person has used a chainsaw to cut down a tree. In other situations, people burning yard waste make the oil become airborne. Exposure to the smoke can lead to the whole face being exposed to the itch and swelling linked to poison ivy.

Dermatologists say the most common method of poison ivy oil transfer is by someone accidentally touching the plant and then rubbing their eyelids.

Medical experts with the Mayo Clinic report that about 50 percent of those who come in contact with poison ivy end up with an itchy rash. Poison ivy treatment includes several options.

Here are some remedies for poison ivy rash that have been effective for many people in the past.

Some people are more comfortable with the idea of a poison ivy rash treatment home remedy. Tea tree oil is oil that more and more people seem to keep in their homes. It has antiseptic properties and can help the blisters from oozing. Calamine lotion is another popular item kept in bathroom cabinets. It can ease the itch of poison ivy and help dry up the blisters. Some people have benefited from an oatmeal facemask when the rash has been on their face, while others have used cucumber or watermelon rind to sooth their burning, itching skin.

Herbal remedies, such as Aloe Vera gel, Rhubarb stem juice, and organic Goldenseal powder mixed with warm water, have been effective for some people.

It’s nice to know that if the need ever arises, there are a number of remedies for poison ivy rash that you can try. If one doesn’t work, simply try another.

Recognize signs and how you get poison ivy rash

As outlined earlier, you can get poison ivy three ways: through direct touching, by touching items contaminated with the ivy oil and by inhaling smoke from the burning plants.

While poison ivy isn’t really contagious, you should know that you can get it if you touch the “urushiol” oil that is still on a person who has come in direct contact with the plant or with his or her clothing.

In the majority of cases, the rash looks like a straight line due to the way the plant brushes against the person’s skin. When contact is with a piece of clothing or pet fur that has the ivy oil on it, the rash may be more spread out. The poison ivy rash reaction normally develops 12 to 48 hours after you have been exposed to the oil. The actual symptoms can last anywhere from two to three weeks.

If you want to avoid getting a poison ivy rash then avoid the plants if you can. Another good tip is to keep your pets from running through wooded areas where there could be poison ivy plants. You don’t want them bringing the oil home on their fur. When you venture out into the woods, it is best to wear protective clothing, just to be on the safe side.

If you think you might have a poison ivy plant in your backyard, remove it by pulling it out with the roots while wearing heavy gloves. Thoroughly wash the gloves and your hands afterwards. If you should become exposed to the poison, wash your hands or any part of the body that came in contact with the plant immediately. Remember to wash any clothing that may have come into contact with the oil as well.

If you do get poison ivy rash and it ends up being a severe case, do not suffer in silence- see a doctor who can help you through the uncomfortable symptoms.