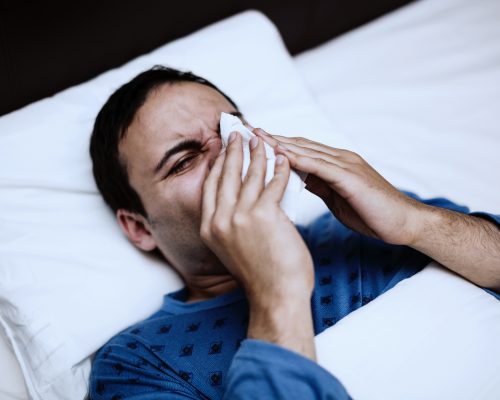 In order to properly treat any condition, incidental or serious, you must be able to first properly identify it. Differentiating a cold (sometimes called, infectious rhinitis) from pneumonia is no different, and understanding the symptoms of each leads to better fighting the condition.

Pneumonia is normally considered the worst of the two, and before antibiotics came along back in the 1930s, it was actually the leading cause of death. Modern medicine changed all of that, and today most people under the age of 65 can endure pneumonia without any significant repercussions. Pneumonia is typically caused by infections and leads to the inflammation of the lungs. Liquid fills up the lung sacs and makes moving oxygen to the bloodstream more difficult.

A common cold specifically infects the nose and throat. Physically, the harm caused by a cold is minimal, and in most instances, a common cold goes away within one week. The cold season tends to fall in line with actual cold temperatures. There are over 200 viruses responsible for spreading colds, which becomes easier to get when people are in close proximity and occurs more often during the fall, winter, and early spring seasons.

Infants are more susceptible to colds than adults. The average adult may suffer about two to four colds during the year, and likely during the fall and winter season. Infants, on the other hand, can suffer up to ten colds over the same period, simply because they haven’t built up their immune systems. This number begins to decline significantly as they age.

Just because pneumonia has a small impact on health doesn’t mean it has no impact. In fact, out of all deaths in children under five years old, 15 percent can be attributed to pneumonia. That figure added up to 922,000 for 2015. Worldwide, that means it’s still the largest cause of death for children within that age range.

The reason so many children are still dying due to pneumonia is because less than one third actually get the antibiotics needed to fight the symptoms. Sub-Saharan Africa and South Asia make up the bulk of these deaths, with children being infected through airborne virus particles. However, pneumonia can also be spread through the blood, which becomes a problem during birth in these aforementioned regions.

The common cold is a more prevalent problem, despite its light physical impact. It’s estimated that there are about 62 million Americans infected each year, accounting for about one billion colds. Breaking that number down further, that’s over five million colds every month. Though the physical damage is low, the economic impact is not.

The difference between the common cold and pneumonia comes down to prevention, treatment, and overall impact on your body. Once these three factors are assessed, then the differences become easy to identify.

First, there isn’t much you can do to prevent a cold in the form of vaccines or medication. There is also not much you can do to deal with the symptoms. The saving grace of a common cold is that it is not harmful and will go away on its own within a week.

Pneumonia, on the other hand, can definitely have some serious consequences if not dealt with appropriately. We’ve mentioned the worst outcome, which is death, primarily in children and infants. But hospitalization is another possibility, as the symptoms of pneumonia are more severe. The good news is, pneumonia can be prevented with vaccination. It can also be treated quite effectively with the right medications.

Pneumonia vs. cold: Is it contagious?

The short answer is yes, both the common cold and the pneumonia are contagious. Pneumonia is spread through bacteria or viruses that become present through something like coughing. If you are in close proximity with an infected person, you only need to breathe in the airborne virus to become infected. However, different types of pneumonia have different levels of infectious rates. Some, like mycoplasma pneumonia, are highly contagious, while others – such as pneumococcal pneumonia – are far less contagious and need ideal conditions to be transferred.

A cold is much more contagious than pneumonia. It is spread in the same way, through airborne droplets coming from coughing or sneezing, but the viruses are more easily picked up by anyone in proximity to the infected individual. That’s why it’s not uncommon to see an entire family sick after their infant begins showing cold symptoms.

A common cold can also be picked up by touching surfaces that have been infected. To get sick, an uninfected individual would have to touch the surface and then touch their mouth or lips, but it is still very possible to happen and it does happen often enough to be significant.

Pneumonia vs. cold: Signs and symptoms

It’s crucial to know the symptoms of both a cold and pneumonia so you can get the treatment you need. For the common cold, the symptoms are rather annoying than they are potentially severe, but you still must recognize what they are.

Some of the more common cold symptoms include:

Any combination of these symptoms likely indicate that you are dealing with a cold.

Again, any combination of these symptoms likely indicate you have the flu. Unlike the cold, however, it’s important that you treat these symptoms immediately to prevent any more serious consequences.


Pneumonia and cold causes: How does it start?

Pneumonia can be caused by the same viruses and in the same manner as a common cold or flu. That is, virus droplets in the air or hand touching. If the virus remains in the nose and throat area, it only develops into a cold. However, if it reaches down to the lungs, then it causes pneumonia, which becomes much more of a physical threat to your body.

Besides bacteria and viruses, mycoplasma is another cause of pneumonia. It is sometimes referred to as “walking pneumonia,” because of its mild effects. People with this form of pneumonia are not bedridden and can, in fact, walk around as if they are healthy.

More severe types of pneumonia can actually be caused by bacteria already in your throat. In most instances, the immune system usually takes care of these bacteria and keeps them at bay, so the infection doesn’t spread anywhere else. But when the immune system is compromised for any number of reasons – cold, cancer treatment, etc. – then these bacteria can find its way to the lungs and quickly cause pneumonia.

Smokers, heavy drinkers, infants, and seniors are probably the highest-risk groups for getting pneumonia. Also, those who have recently undergone surgery or have a chronic illness are also at an increased risk.

When it comes to the common cold, it should be made clear that it is not the cold weather that makes catching a cold more likely. It is caused by bacteria transferred either through the air, or through common surfaces.

Think door handles, steering wheels on cars, doors at a school or work. All of these surfaces can be infested with bacteria. This is why so many medical professionals stress handwashing before every meal. The regular contact you make throughout the day with surfaces that can potentially be infected is too great not to clean your hands properly before enjoying a meal.

Differences between pneumonia and cold: Diagnosis and treatment

A physical examination by a doctor should reveal whether you have pneumonia or a common cold. For pneumonia, doctors will check to see if your glands are swollen and test your temperature for a fever. Since pneumonia takes place in the lungs, they will use a stethoscope to listen to your breathing and decipher the problem. A blood test will also be able to determine whether you have pneumonia, and X-ray will show any buildup of fluid in the lungs.

When it comes to treating pneumonia, following the directions to the exact specifications is important. People tend to want to stop taking any prescriptions or lighten their dose as they begin to feel better. But this is not advisable. Take the medication for as long as your doctor has instructed.

Preventing pneumonia can be done effectively through diet. Eating a balanced diet that includes plenty of fruits and vegetables is a great start. Getting lots of rest is also beneficial and helps keep your immune system strong. Getting vaccinated is also a great idea and something everyone should do, particularly around cold and flu season. We’ve already mentioned the importance of handwashing, which prevents the bacteria from spreading, but if you notice that you have a cough or are feeling off for more than three or four days, then go see your doctor.

For common colds, it is not necessary to see a doctor to make this diagnosis. If you are sniffing and coughing and do not have a high temperature, then it is likely you have been affected by the cold bug. However, if other symptoms do pop up, then it’s advisable to visit your doctor just in case.

With colds, there are no treatments to rid yourself of the virus. It’s important to get plenty of rest, drink lots of fluids, and try to avoid being around other people to stop the virus from spreading. Medication makes you feel better, but it doesn’t kill the cold virus. Only time can do that. And for children under six, most medical professionals don’t advise giving any kind of medication.

Pneumonia can take as little as three days or as long as 10 days to begin to show symptoms. The severity can last anywhere from two or three weeks in otherwise healthy individuals, and up to eight weeks in those who have other compromising complications.

Other than age, much of how long pneumonia lasts has to do with the strength of your immune system, whether it is bacterial or viral pneumonia (bacterial is worse), and how quick you are in assessing and treating the condition.

In most instances, a cold is usually detected much sooner than pneumonia. You can tell within the first two or three days if you have a cold and symptoms usually disappear within a week. It may start off fairly innocently with sneezing, a sore throat, and some fatigue in the first two days, then gradually move up to coughing on days three and four. By the sixth day, your symptoms should start to ease before disappearing by day seven or shortly thereafter.

In summary, the difference between a pneumonia and a cold is considerable. Pneumonia should be treated aggressively and immediately. Not doing so can result in some serious consequences, particularly for infants, young children, and seniors. With the common cold, no need to get too worked up. Get some rest, drink lots of fluids, and make sure you are not infecting anyone else.

You can prevent both of these conditions by improving your diet, sleeping well, and practicing proper handwashing techniques. Most important is to know the symptoms so you can take whatever measures are necessary to get better.

Pneumonia vs. pneumonitis, differences in symptoms, causes, and treatment

Pneumonia and pneumonitis are two serious respiratory infections, which – if not treated early on – can lead to life-threatening consequences. Although both conditions affect the lungs, there are distinct differences that help differentiate between the two conditions. Continue reading…

Distinguishing between the common cold and the flu (influenza) may be quite different as they do share many similar traits. Furthermore, a person can experience both a cold and the flu simultaneously, which can make diagnosis even more difficult. Continue reading…