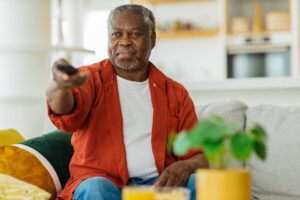 Hey, if you’re a sports fan, you might be watching a little more TV than usual. The same can be said if you’re binge-watching the latest releases on streaming services.

There’s a lot to watch, and it’s both easy and tempting to settle into the couch and let the programming role. But it might be worth it to pick your games wisely or get up after only an episode or two.

New research shows that if people committed to watching under an hour of television per day, it would get rid of 11 percent of coronary heart disease cases.

Previous studies have linked sedentary behavior to coronary heart disease. Still, this study was the first to look specifically at screen-based sitting, including television watching and leisure-time computer use.

Researchers also factored in the participant’s DNA, creating personal scores for the risk of developing coronary heart disease based on 300 genetic variants that influence the condition.

The study found that people who watched more than four hours per day of television had the most significant risk, regardless of their genetic score.

The average American spends about two hours and 45 minutes in front of the TV per day.

The difference might have something to do with when people watch television and what they do while watching. Most watch TV in the evening after dinner, which is generally the largest meal of the day. This could lead to higher levels of glucose and lipids in the blood.

People are also likely to mindlessly snack while watching TV, something they may not do while using a computer because it may be keeping both the mind and the hands engaged.

Splitting up television time, dedicating activity during the day, or even moving during commercials may help offset some of the risks of watching television.