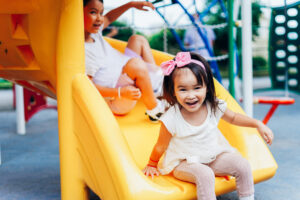 Do you remember making friends in pre-school? It may seem like so long ago, but new research suggests that those friendships may have actually been good for your mental health. These findings are the first to provide clear evidence that ‘peer play ability’ — the capacity of children to successfully play with other children — has a positive and protective effect on mental health later in life.

For the study, researchers from the University of Cambridge examined data from almost 1,700 children collected between the ages of three and seven. Different types of peer play were analyzed, including simple games, pretend play, goal-directed activities, and collaborative games.

These peer play indicators were used to create a measure of ‘peer play ability,’ the underlying ability of a child to engage with peers playfully. At age seven, children were also watched for any possible signs of mental health problems, including hyperactivity, conduct, emotional, and peer problems.

At age three, those with better peer play ability consistently showed fewer signs of poor mental health four years later. Researchers noted these children were also less likely to have lower hyperactivity, fewer conduct and emotional problems, and they were less likely to get into disagreements with other children.

These findings suggest that children should be given access to well-supported opportunities to play with their peers. This is especially true for young children who may be vulnerable to mental health issues. An example of an opportunity may include a playgroup run by early years specialists.

Dr. Jenny Gibson from the University of Cambridge said: “We think this connection exists because through playing with others, children acquire the skills to build strong friendships as they get older and start school. Even if they are at risk of poor mental health, those friendship networks will often get them through.”

This study outlines the importance of mental health throughout life. At an early age, what we are exposed to and how we deal with our peers can significantly affect our mental and brain health.

These include ginkgo biloba, huperzine A, bacopa extract, rosemary extract, and a B vitamin complex. This unique formula helps boost circulation, fight free radicals, and help to promote clear thinking.