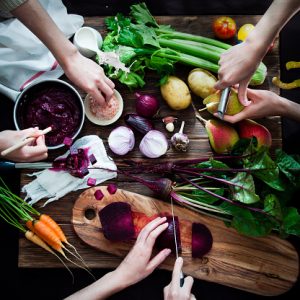 Heart disease is the leading cause of death in both men and women, with almost 25 percent of deaths in the United States attributed to the disease. The term heart disease describes a range of conditions that affect the blood vessels of the heart, rhythm problems, and heart defects among others.

For the most part, living a healthy lifestyle is the most important protective factor against developing heart disease. This was recently emphasized in a study that found that eating a mostly plant-based diet was associated with less risk of developing heart failure.

Other diets included in the study were:

The data used in this study was collected from a nationwide observational study of risk factors for stroke in adults 45 years or older, called Reasons for Geographic and Racial Differences in Stroke (REGARDS). Over 15,000 participants without coronary artery disease or heart failure were included, having been recruited from 2003 to 2007 and followed until 2013.

Subjects reported their diets using questionnaires. Over a period of 3,000 days, there were 300 heart failure incident hospitalizations reported.

Of all the dietary plans identified, those who had the ate mostly plant-based diets had the greatest decrease in risk of heart failure events after adjusting for age, sex, and race.

While eating a mostly vegetarian or vegan diet has always been associated with being healthy, this study provides evidence supporting the fact that it could help you live longer.

Related: Reduce your risk of heart disease with this beverage

Your heart disease risk doubles because of this…