Home » Heart Health » Your heart disease risk doubles because of this… 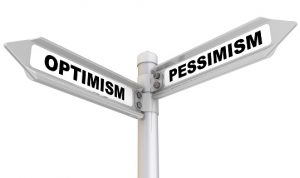 A famous Hollywood comedian once said, “You can never find a rainbow if you’re looking down.” Modern scientists researching pessimism might agree with him. In fact, they take it one step further and say that pessimism—waiting for the worst to happen and lacking confidence in the future—could actually hasten one’s death.

According to a study, a pessimistic attitude increases the risk of death from heart disease. Finnish researchers followed 2,267 men and women aged 52 to 76 for 11 years. At the start of the study, participants were presented with six statements. Some of these were positive statements like, “In uncertain times, I usually expect the best.” The other statements were negative, like “If something can go wrong for me, it will.” After reading the statements, the participants were asked to rate the statements on a scale of zero to four, where zero was the least applicable and four was the most applicable. (Wouldn’t it be great if everything you do took just half the effort on your part?)

Those who scored high on the positive-thinking statements didn’t necessarily have low pessimism scores, so people didn’t fit neatly into one category. From the scores, it seemed logical to conclude that a person can have both optimistic and pessimistic properties simultaneously.

The researchers also monitored the cholesterol levels, blood pressure readings, glucose readings, and other health and behavioral characteristics of all the participants. (Your tiredness is not just because of aging.)

During the 11-year follow-up, the researchers found that 122 people died from coronary heart disease (CHD). The researchers looked at the optimism and pessimism levels of the deceased subjects and found that those who’d died had been more pessimistic at the start of the study than those who were still alive. Even after controlling for risk factors like smoking and cholesterol levels, the top 25 percent of pessimistic thinkers had more than double the risk of CHD-related death than those with the lowest pessimism scores.
The study didn’t look into why pessimistic people were more likely to die of CHD, but the researchers think that a negative outlook could promote inflammation, leading to heart problems. According to lead researcher Mikko Pänkäläinen, a psychiatrist at the Paijat-Hame Central Hospital in Lahti, Finland, “It has been found, for example, that depressed individuals have higher levels of inflammation markers in their blood.” (Even though you may not know it, your heart is on its way down.)

Look on the bright side

Optimism and pessimism are personality traits that develop early in life and remain pretty stable through adulthood. According to Dr. Pänkäläinen, while having a brighter outlook can’t hurt, it could be hard to train your psyche out of a negative mindset that has developed over the years. So, if you do have a pessimistic trait, your best bet to lower your risk of coronary heart disease is to put extra effort into cultivating healthy habits like exercising regularly and quitting smoking. As pessimism is a coronary risk factor that is realistically out of our control, it only makes sense to look positively at the other coronary heart disease risk factors that can be controlled and reduce their risk.