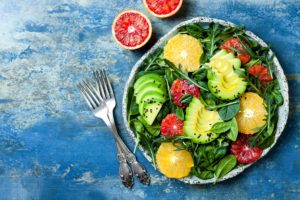 New research shows that those who follow a plant-based diet and consume fewer animal-based foods may have better heart health and a lower risk of dying from a heart attack, stroke, or other cardiovascular diseases. As more people are turning to more plant-based diets around the globe, new studies such as this are showing how doing so can improve heart health significantly.

The study was published in the Journal of the American Heart Association, the Open Access Journal of the American Heart Association/American Stroke Association. Researchers for the study reviewed a database of information based on food intake of more than 10,000 middle-aged U.S. adults who were monitored from 1987 to 2016, and who did not have cardiovascular disease at the start of the study. Each participant was categorized into one of two groups—those who ate a higher amount of animal-based foods, and those who ate primarily plant-based diets.

Lead researcher, Casey M. Rebholz, Ph.D., assistant professor of epidemiology at Johns Hopkins Bloomberg School of Public Health, discussed the study. “While you don’t have to give up foods derived from animals completely, our study does suggest that eating a larger proportion of plant-based foods and a smaller proportion of animal-based foods may help reduce your risk of having a heart attack, stroke, or other type of cardiovascular disease.”

“Our findings underscore the importance of focusing on your diet. There might be some variability in terms of individual foods, but to reduce cardiovascular disease risk, people should eat more vegetables, nuts, whole grains, fruits, legumes, and fewer animal-based foods. These findings are pretty consistent with previous findings about other dietary patterns, including the Dietary Approaches to Stop Hypertension, or DASH diet, which emphasize the same food items,” Rebholz added.

This study is one of the first to examine the proportion of plant-based versus animal-based dietary preferences. Prior studies only showed heart-health benefits from vegetarians or Seventh Day Adventists who consume a mostly vegan diet. This study helps to show the general population that they don’t need to give up animal products completely—they should just be limited to help lower the risk of cardiovascular complications.

Future research on plant-based diets is needed to examine the quality of plant-based foods and how they impact the health benefits associated with them. Quality and nutrition of the foods was not taken into consideration for this study, but properties such as sugar, organic, and level of processing will help to focus the studies more on exactly the type of plant-based foods are the healthiest for cardiovascular health.