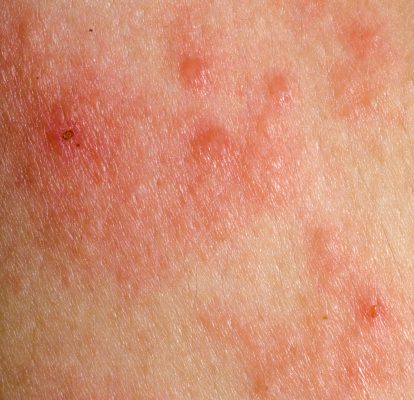 Pityriasis rosea, a skin condition that first appears as a rash, is easily misunderstood. Doctors and dermatologists say understanding the different staged of pityriasis rosea can better prepare people to deal with its symptoms.

Pityriasis rosea rash eventually takes up a distinctive look and shape in its later stages. It is known as an ailment that doesn’t spread at the time of its initial influx. The redness and rash usually hits people between the ages of 10 and 30. It’s misinterpreted because the symptoms can appear at the same time as other skin conditions that are similar in appearance. For example, pityriasis rosea can be mistaken for eczema, psoriasis, a reaction to a specific medication, folliculitis (the infection and inflammation of one or more hair follicles), pityriasis rubra pilaris (a rare disorder that has the potential to cover the entire body), and pityriasis lichenoides chronica, a rash that presents with small pimple-like bumps.

While some of the pityriasis rosea symptoms mentioned above sound frightening, the good news is that the rash does not leave scars. Many people wonder, is pityriasis painful? The answer is no, but it can be very itchy.

Pityriasis rosea occurs in about one in 50 people who see a dermatologist. Although it does tend to appear in people aged 10 to 30, there have been cases where babies as young as 10 months old as well as elderly people have experienced this skin condition. Although skin specialists can’t explain why, twice as many women get pityriasis rosea than men. As with many skin problems, people are bound to wonder, can you get pityriasis rosea more than once? Thankfully, pityriasis rosea recurrence is rare.

Every situation is different, but this uncomfortable skin condition generally lasts anywhere from six to 12 weeks. Some people may notice that pale marks remain for a few months. However, they eventually disappear, and the skin does return to normal.

Pityriasis rosea complications can occur during pregnancy. Research shows that it can cause miscarriage in eight out of 61 women. Reports suggest that premature delivery has also occurred in some women with this skin condition. Pityriasis rosea that is caused by the reactivation of herpes 6/7 in association with a drug can lead to drug hypersensitivity syndrome.


When to seek medical advice for pityriasis rosea?

If you suspect you have pityriasis rosea and the itchiness is overwhelming, you should visit your doctor. There are several treatments your doctor can recommend to help ease your symptoms. You should also consider seeing a physician if your symptoms last longer than five months, or if you have symptoms but don’t have the patch that is normally associated with pityriasis rosea. For example, if you have a rash that covers your arms, legs, and trunk, or you have a rash that is spreading very quickly, you have large patches that are starting to come together, or if you have patches that are releasing clear fluid or leaking pus.

Although the cause of pityriasis is still unknown, many experts suspect the condition could be caused by previous viral infection.

When it comes to diagnosing a person with this skin problem, the first step a physician will take is visual examination. Simple questions, such as how long the symptoms have existed, will be asked. In some cases, a patient will be referred to a dermatologist who will be able to closely examine for all kinds of skin conditions. If the problem is not obvious, testing such as blood samples, scraping of a small area of skin to check for fungus, or a biopsy to examine tissue may be conducted.

If you are diagnosed with pityriasis rosea, remember that it is not going to last forever or scar you. Relieving the itchiness can treat the vast majority of cases. Creams that are designed to moisturize and soothe the skin, as well as allergy therapies have been very helpful in treating people who experience the discomfort associated with pityriasis rosea.