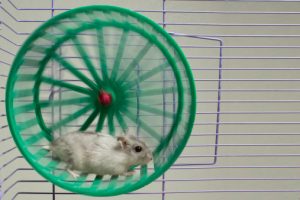 A recent study published in Frontiers in Aging Neuroscience has found that voluntary physical exercise has a positive effect on stroke recovery. Physical exercise is already known to play a role in delaying memory loss and improving cognitive ability in older individuals.

The study was conducted by Dr. Evgenia Kalogeraki at Georg-August University, Germany, and looked at the effects of physical exercise on stroke recovery in mice. A previous study on mice revealed that subjects who were reared in a more fulfilling environment—with cognitive stimulation and access to a running wheel—retained a more youthful brain well into adulthood.

The new study aimed to determine whether exercise by itself was enough to garner the same benefits, as well as to see if it could aid in the rehabilitation of the brain after a stroke. Dr. Kalogeraki conducted the study by using a standard test to evaluate the plasticity of the brain—the ability of each subject’s brain to change its response in relation to an experience.

The test evaluated ocular dominance plasticity, or the ability of the brain to change which eye is dominant after one is compromised for a short time. The results showed that the older mice who exercised could change their eye dominance much easier than the ones who didn’t. The study also showed that the older mice who had access to a running wheel maintained ocular plasticity and could change eye dominance even after suffering from a stroke, while the mice that did not have access to a running wheel and therefore were much less physically active did not.

Furthermore, when the mice who had not previously had access to a running wheel began using one after having a stroke, they began to see the same benefits as the mice who had access to a running wheel prior to their stroke. This shows that voluntary physical exercise was able to help rehabilitate the brain and rebuild ocular plasticity even when started after the fact.

The idea of exercise being able to aid in brain function after the event is especially exciting, as it may lead to the development of better cognitive recovery methods for stroke survivors. Kalogeraki was encouraged by the results and plans to examine the effects of physical exercise on the brain further, stating, “We now hope to study the mechanisms underlying exercise-mediated activity changes in the brain, to ultimately better guide studies in humans.”
While the results of the mice trials are certainly encouraging, more research must be conducted before a definite causality can be determined between physical activity and recovered cognitive ability after a stroke in humans. Fortunately, human testing should not be too difficult as exercise has already been deemed beneficial for those recovering from a stroke in order to regain mobility, which should make finding willing participants a non-issue. The results were so promising that Dr. Kalogeraki herself has begun exercising regularly to keep her brain and body healthy and prevent the loss of plasticity.