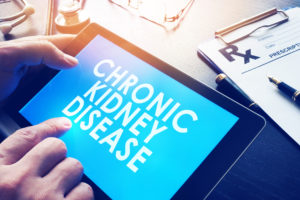 New research has identified a pathological change that appears to link chronic kidney disease to progressive heart disease. Navkaranbir Bajaj, M.D., of the University of Alabama at Birmingham and his team found this link for the first time being tested in humans.

Approximately 14 percent of the U.S. adult population has chronic kidney disease, so this new information could offer a potential treatment target that would benefit this large population. The research published in the journal Circulation found that not only was there a link between chronic kidney disease and heart disease but also found that it could lead to heart-disease death.

Bajaj, a UAB assistant professor in the Division of Cardiovascular Disease, Department of Medicine and Department of Radiology said, “I am now collaborating with other UAB researchers to figure out how we can target therapeutics to help these patients.”

The pathological change that has been found to link kidney disease and heart disease is called coronary microvascular dysfunction (CMD). CMD is described as decreased blood flow in the small blood vessels inside the heart muscle that provides oxygen and fuel to feed the pumping heart.

For the study, 352 patients with chronic kidney disease, all with healthy heart function, were examined. They were all measured by ejection fraction and none showed signs of overt coronary artery disease. The researchers measured CFR and also measured signs of subclinical heart dysfunction via deformation analysis with echocardiograms.

Patients were then followed for a median of 4.4 years. It was found that a total of 108 participants had major events such as death and hospitalization for non-fatal heart attack or heart failure.

Abnormal Mechanics of the Left Ventricle

The study concluded that these significant associations “provide important new evidence that the development of severe microvascular dysfunction likely signals the transition from physiological to pathological left ventricle remodeling that increases the risk of heart failure and death in patients with chronic kidney disease. To the best of our knowledge, our study is the first and largest to comprehensively explore these associations and to suggest a possible pathway to the development of uremic cardiomyopathy in individuals without overt ischemic heart disease.”