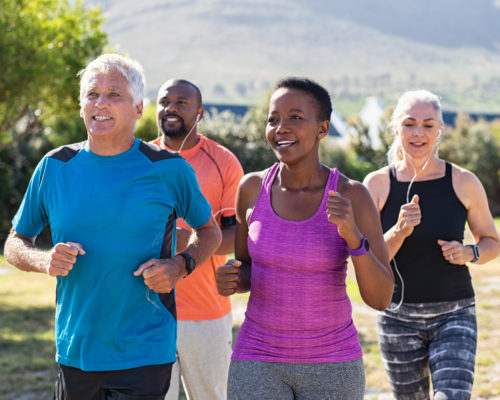 New research has found that patients with atrial fibrillation (Afib) who get regular exercise may have a longer life expectancy. Compared to their sedentary counterparts, patients with the common heart rhythm problem can benefit by staying physically active.

In atrial fibrillation, the heart muscle quivers rather than contracting normally due to chaotic electrical impulses in the upper chambers. As a result, risk of stroke is caused by blood clots forming in the heart and traveling to the brain. Because of this, Afib patients are often prescribed blood thinners to reduce the risk.

Those with Afib often find it hard to exercise because exertion makes the heart race, leading to a drop in blood pressure that can lead to feeling faint. Patients also report feeling breathless even after performing low-intensity exercise and tire more quickly than those without Afib.

The study, led by Dr. Bjarne Nes of the Norwegian University of Science and Technology in Trondheim reported in the European Heart Journal found that among 1,100 adults with atrial fibrillation, those who got regular exercise were about 45% less likely to die of any cause or cardiovascular disease specifically compared to those who got little physical activity. The study followed participants over nine years and the average age was 72 at the beginning.

It was found that only one-third of the participants in the study got the minimum recommended amount of exercise for optimal health. This is considered 150 minutes a week of moderate-intensity of physical activity or 75 minutes of vigorous exercise.

The results of the study suggest that moderate exercise could help patients with atrial fibrillation live longer. This is not the first study to outline the importance of physical activity to help with various health problems. It has been shown that physically active people have lower blood pressure, lower cholesterol, lower body weight, and lower levels of stress. By lowering risk factors, it can help to protect patients from heart attacks, heart failure, and death.

Although this study was not meant to identify the ideal amount, type, or frequency of activity for people with Afib, the results do add to evidence suggesting that it can improve the outcomes for atrial fibrillation patients.

Dr. Jonathan Piccini, director of cardiac electrophysiology at Duke University Medical Center in Durham, North Carolina who was not involved in the study commented, “Another key message is that some exercise is better than no exercise. These are really important messages because exercise is a very powerful treatment that is highly cost-effective and leads to multiple benefits in addition to reduction in atrial fibrillation.”