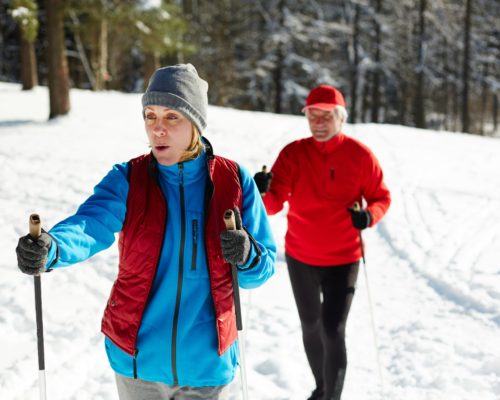 Those who enjoy winter activities, including skiing, may have a lower incidence of depression and vascular dementia, but not Alzheimer’s, according to new research from Lund University in Sweden together with Uppsala University. These brain researchers had the unique opportunity to analyze a large group of physically active skiers over two decades and found some interesting results.

Tomas Deierborg, associate professor at Lund University led the research team. It had been previously shown that the skiers of Vasaloppet, a popular cross-country skiing race in Sweden, have a reduced risk of suffering a heart attack, but no one had found any information on what it may do for brain diseases.

The group of 197,685 Vasaloppet skiers showed that there were 50 percent fewer people affected by vascular dementia than in the control group, which had a total of 197,684 people. One interesting fact that stood out was that the risk of developing Alzheimer’s disease was not reduced. This information contradicts previous studies in the field which show that physical activity has an impact on Alzheimer’s.

“The results indicate that physical activity does not affect the molecular processes that cause Alzheimer’s disease, such as the accumulation of the amyloid protein. Nonetheless, physical activity reduces the risk of vascular damage to the brain, as well as to the rest of the body,” says memory researcher Oskar Hansson, professor of neurology at Lund University.

A Reduction in Parkinson’s Disease

Part of the study also included looking at whether the Vasaloppet skiers had a reduced risk over time of developing Parkinson’s disease. Two decades after they had participated in the ski race, 119 people had been diagnosed with Parkinson’s. In the general population, 164 people had received the diagnosis, a significantly higher number of reported cases.

“The mechanisms behind this still need to be investigated, but it seems that those who are physically active have a ‘motor reserve’ that postpones the onset of the disease. If a person trains a lot it may be possible to maintain mobility for longer, despite the pathological changes in the brain,” speculates Tomas Olsson, doctoral student and author of the study.

More research is needed to find out why those who were part of the ski team were able to reduce the risk of some brain diseases, but not Alzheimer’s. As previous studies have shown that physical activity does help in the prevention of Alzheimer’s this shows a disconnect between the research. The results of the study help to question if exercise can ultimately change the neurodegeneration caused by things like genetics and amyloid buildup.