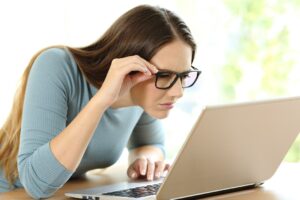 Did you know that people who have a sight problem are at a greater risk of developing dementia? A recent study showed that those with vision impairment were more likely to develop dementia than those with normal vision. This is an important discovery, as it could help health professionals better identify and treat those at risk of developing dementia. Read on for more information about the study and its findings.

The study included 16 studies, including 76,373 participants, with five cross-sectional studies and 11 longitudinal studies published before April 2020. By analyzing these studies, researchers were able to find important relationships between visual impairment and cognitive outcomes in older adults. It was noted that people with a sight problem had an increased risk of cognitive impairment and dementia, regardless of whether their visual impairment was self-reported or diagnosed by a physician. Also, the likelihood of having cognitive problems was 137% higher among people with a sight problem than those who did not.

Overall, patients with a sight problem at the start of the study had a 41% increased risk of developing cognitive impairment and a 44% risk of dementia, compared with those who did not.

“Finding ways to prevent or delay the onset of dementia could help reduce its devastating impact on the lives of affected individuals and their families, especially in light of the growing burden of the disease. Identifying modifiable risk factors is the first critical step for developing effective interventions to achieve this goal,” said lead author Beibei Xu.

“Our new results highlight the importance of regular eye examinations for older adults — enabling any potential problems with their vision to be spotted and treated early. They also suggest that any self-reported changes to a person’s eyesight should not be ignored.”

Millions of people worldwide are living with dementia, and the number is set to increase over the next few decades. This disease has a devastating impact on people’s lives as it can cause memory loss and changes to their personalities and behaviour. Ultimately, they will become entirely dependent on others for their care.

While some degree of cognitive decline is nearly inevitable as you age, this study shows how other factors can take a toll on the ability of the brain to function at peak potential. This can affect memory, concentration, and overall brain function. The Smart Pill can help to enhance cognitive function and memory through 9 ingredients that help to support, nourish, and maximize brain health. These include ginkgo biloba, huperzine A, bacopa extract, rosemary extract, and a B vitamin complex. The formulation of these ingredients is an excellent way to help fight free radicals, boost circulation, and provide nutritional support to assist with cognitive function.