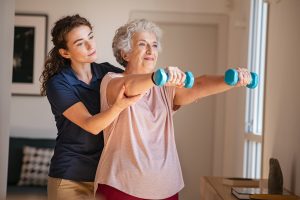 New research has found that people who are more physically active are less likely to develop Alzheimer’s disease compared to those who are less physically fit. The risk reduction was associated with the level of one’s fitness, meaning it is not an all-or-nothing proposition.

The study, which will be presented at the American Academy of Neurology’s 74th annual meeting, involved 649,605 military veterans who were registered in the Veterans Health Administration database. All participants had an average age of 61 and were followed for an average of nine years. None of the participants had Alzheimer’s disease at the start of the study.

The study identified each participant’s cardiorespiratory fitness level. This is a measure to tell how well the body transports oxygen to the muscles and how well they can absorb the oxygen during exercise.

Participants were divided into five groups, from least fit to most fit. Fitness levels were determined by the outcomes of participants exercising on a treadmill. The test measured exercise capacity, the highest amount of physical exertion a person could sustain.

“The idea that you can reduce your risk for Alzheimer’s disease by simply increasing your activity is very promising, especially since there are no adequate treatments to prevent or stop the progression of the disease,” said Edward Zamrini, study author.

Researchers hope this study can help develop a simple scale that can be individualized to see the benefits that fitness can deliver.

Brain function is an essential topic throughout aging. While some degree of cognitive decline is inevitable as you age, other numerous factors can take a toll on the ability of the brain to function at peak potential.