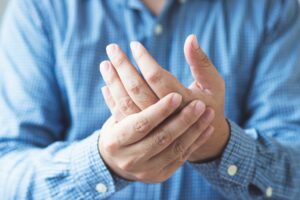 As if living with rheumatoid arthritis (RA) isn’t hard enough, a new study suggests that people with the condition are also more likely to develop dementia and depression. This included both Alzheimer’s disease and vascular dementia.

Rheumatoid arthritis is a type of arthritis that affects the tissues around the joints. RA is an autoimmune disease, which means that the body’s immune system attacks its own tissues. It can cause inflammation, pain, and stiffness in the joints and affect other parts of the body, such as the heart and lungs.

The study, which used information from the filling of prescriptions for antidepressants, showed that depression was associated with more than 6-fold increased mortality risk in patients with RA. Researchers also found that clinically active RA is associated with an elevated risk of dementia. Every five years after the diagnosis of RA, the cumulative incidence of dementia increases by 2-3%.

It was noted that the presence of rheumatoid nodules, hypertension, joint swelling, heart failure, and depression during the first year after RA incidence was significantly associated with the risk of dementia. Cardiovascular disease or cerebrovascular disease (particularly ischemic stroke and heart failure), large joint swelling, anxiety, and depression were found to increase the risk of cognitive impairment, including dementia.

This study appears to go against other research findings on the link between dementia and RA because the incidence of dementia among RA patients has declined in recent years. More studies are needed to determine if this reflects broader trends of dementia incidence over time, treatment advances yielding better control of RA or other factors.

While the findings don’t prove that rheumatoid arthritis causes dementia or depression, they do suggest that there may be a link between the two conditions. If you’re struggling with rheumatoid arthritis, it’s important to be aware of the increased risk of developing other health problems and talk to your doctor about any concerns.

While some degree of cognitive decline is nearly inevitable as you age, this study shows how other factors can take a toll on the ability of the brain to function at peak potential. This can affect memory, concentration, and overall brain function. The Smart Pill can help enhance cognitive function and memory through 9 ingredients that help support, nourish, and maximize brain health. These include ginkgo Biloba, huperzine A, bacopa extract, rosemary extract, and a B vitamin complex. The formulation of these ingredients is an excellent way to help fight free radicals, boost circulation, and provide nutritional support to assist with cognitive function.

Whether you have rheumatoid arthritis or not, supporting bone health is essential as you age. Bone Rescue can help to support the maintenance and development of bones thanks to its unique formula, including strontium. Chemically similar to calcium, strontium can provide great support for aging bones. Bone Rescue contains 680 mg of strontium along with additional ingredients to help keep bones strong and healthy.