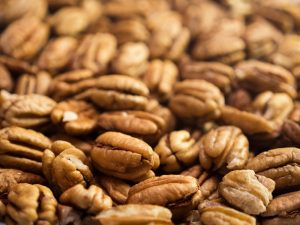 A pecan-enriched diet has been found to reduce cholesterol in patients at risk for cardiovascular disease. A new study conducted by researchers in the UGA College of Family and Consumer Sciences has been able to link the consumption of pecans to significant improvements in total cholesterol, triglycerides, and low-density lipoprotein (LDL) or “bad” cholesterol.

“This dietary intervention, when put in the context of different intervention studies, was extremely successful,” said Jamie Cooper, one of the study’s authors. “We had some people who actually went from having high cholesterol at the start of the study to no longer being in that category after the intervention.”

For the research, 52 adults between the ages of 30 and 75 who were at higher risk for cardiovascular disease were assigned to one of three groups. The first group consumed 68 grams of pecans a day (about 470 calories) as part of a regular daily diet. The second group substituted pecans for a similar amount of calories from their usual diet, and the control group did not consume pecans or add calories into their normal diet.

After eight weeks, all participants consumed a high-fat meal to determine changes in blood lipids and blood sugar or glucose in the blood. This was able to show that post-meal triglycerides were reduced in the group with the pecan-enriched diet. Post-meal glucose was lowered in the group that substituted pecans.

It was noted that the addition of pecans into a daily diet produced a greater and more consistent reduction in total cholesterol and LDL compared to many other lifestyle interventions.

Overall, there was an average drop of 5% in total cholesterol and between 6% and 9% in LDL among participants who consumed pecans. Researchers believe pecans are also a more sustainable approach for long-term health.

A Small Reduction in Cholesterol

Previous research has shown that even a 1% reduction in LDL is associated with a small reduction of coronary artery disease risk. This helps to show that these reductions are clinically meaningful.

Researchers believe that the known bioactive properties of pecans were responsible for the improvements in total cholesterol. Pecans are high in fiber and healthy fatty acids, both of which have been linked to lower cholesterol.

As an easy way to lower cholesterol, add some pecans into a daily diet. They are a heart-healthy way to get added fiber and healthy fatty acids.