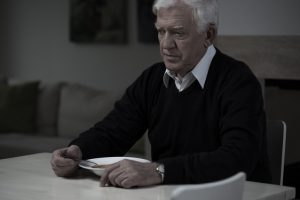 During the follow-up period, 66 people with depression and 97 without depression were diagnosed with Parkinson’s disease. The researchers found that having depression triples the risk of developing Parkinson’s.

Yang concluded, “Many questions remain, including whether depression is an early symptom of Parkinson’s disease rather than an independent risk factor for the disease. Our study also found that depression and older age and having difficult-to-treat depression were significant risk factors as well.”

Researcher Danny Bega explained, “We confirmed suspicion that depression is a very common symptom in Parkinson’s disease.  Nearly a quarter of the people in the study reported symptoms consistent with depression. This is important because previous research has determined that depression is a major determinant of overall quality of life.”

The researchers looked at medical records of over 7,000 people with Parkinson’s disease. Among those with the highest levels of depressive symptoms, only one-third were prescribed treatment medications prior to the start of the study, and even fewer were seeing a social worker or mental health specialist.

The researchers then focused on the larger group of patients not receiving treatment for depression. During the follow-up period, less than 10 percent were prescribed antidepressants or referred to a councilor.

Dr. Bega added, “The majority of these patients remained untreated. Still, the physician recognition of depression in this population was actually better than previous reports had suggested.”

“Physicians must be more vigilant about screening patients for depression as part of a routine assessment of Parkinson’s disease, and the effectiveness of different treatments for depression in this population need[s] to be assessed,” he concluded.

Treatment options for patients with Parkinson’s disease and depression

Principal investigator Lee Blonder said, “This was a surprise. It is the opposite of our original hypothesis that both groups of PD [Parkinson’s disease] patients would improve in cognitive performance on dopaminergic medications, and that mood in the depressed PD group would also improve.”

The study included 28 Parkinson’s disease patients – 18 without depression and 10 with depression – and were assessed for cognitive function at baseline.

Due to the small size of the study, the results are only preliminary. Blonder added, “Additional studies are required before these results should be used to alter treatment plans. [But] future research should ultimately focus on investigating treatment options for patients with Parkinson’s and depression to maximize patient function without compromising their mental health.”