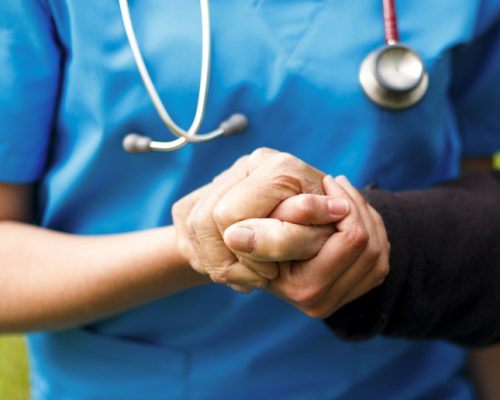 Parkinson’s disease is a progressive ailment that affects the nervous system and thus movement. In many individuals, the first symptoms of Parkinson’s disease are mild, such as tremors in one hand, but the most common signs are stiffness and slowing of movement.

Research shows that in people with Parkinson’s, nerve cells in the brain gradually break down or die. The symptoms of Parkinson’s disease occur because the cells or neurons that are supposed to produce dopamine (a chemical messenger in the brain) decrease or disappear. Declining dopamine levels results in abnormal brain activity.

Early symptoms of Parkinson’s disease can be barely noticeable and tend to happen gradually. Some people may simply have difficulty getting out of a chair, while others may notice that their handwriting is slow or looks smaller. Family members or friends may notice that the face of a person with early Parkinson’s lacks expression or that the person seems unsteady and slow. These early signs and symptoms of Parkinson’s disease can last a long time before more obvious signs of the disorder start to appear.

There are many signs and symptoms of Parkinson’s disease. The problem is, some people assume that these are just indications of aging. While stiffness and slowing down is normal as we get older, there are many motor symptoms that are not. Symptoms of Parkinson’s disease in the elderly have to be carefully considered, because early diagnosis and treatment can help minimize dopamine loss in the brain and help maintain muscle function.

Here’s an overview of some typical motor symptoms associated with Parkinson’s disease:

Resting tremor – this often begins in one finger and involves a shaking movement. It can appear when a person’s muscles are relaxed (at rest).

Bradykinesia – causes difficulty with repetitive movement. It means a person could have a hard time with everyday tasks, such as buttoning a shirt or brushing teeth.

Rigidity – the muscle tone of the affected limb is stiff and doesn’t relax. This leads to a decreased range of motion.

Postural instability – this is the tendency to be unstable when standing upright.

Parkinson’s disease was first discovered about 200 years ago. Since then, multiple studies have been conducted on the disorder, but no cure has been found, and the diagnosis still depends on identifying features such as tremors, slowness, stiffness, rigidity, and instability, as described above. When a person is having unusual slowness or unexpected tremors, a doctor will take a careful medical history and conduct a detailed physical examination to look for signs of a neurodegenerative disease, such as Parkinson’s.

There is also what is referred to as, secondary motor symptoms. For example, freezing of the gait is a sign of Parkinson’s. People who experience freezing will hesitate before taking a step. This symptom can be temporary, so a person then transitions to a normal stride once they get past that first awkward step.

While we can’t say why, it seems as if freezing happens in certain situations, such as when starting to walk, when pivoting, when crossing through a doorway, or approaching a chair. Micrographia is also considered a secondary motor symptom. This is the term used to describe the shrinking of handwriting, which occurs due to bradykinesia – the cause of difficulty with repetitive actions. A mask-like expression on the face and unwanted accelerations, which means a person’s movements are too quick as opposed to too slow, are secondary signs as well.

Below are more secondary motor symptoms:

Not everyone with Parkinson’s will develop all the signs and symptoms outlined above. Each person’s experience can be different.

The majority of people who suffer from Parkinson’s disease also experience non-motor symptoms. These are signs that do not involve physical tasks or mobility. Normally, non-motor symptoms are not visible to a person’s family and friends, but they can be very upsetting to the actual sufferer.

If you have any of the symptoms listed above, it doesn’t automatically mean that you have Parkinson’s disease. These symptoms are helping medical officials gain a better understanding of the disease process though.

Here are some other non-motor symptoms that those with Parkinson’s may experience:

Parkinson’s disease risk higher in men, but may be reduced with flavonoid-rich foods