Home » Health News » Pandemic Sitting Might Be Adding to Anxiety 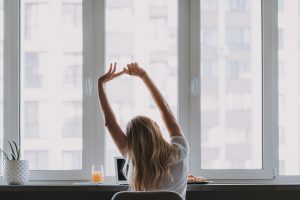 The COVID-19 pandemic may go down as sitting’s golden age. Millions of people traded in commuting for a short trip between rooms. They also stopped going to the gym, community center, playing sports, and countless other activities.

Impacts on physical health are relatively easy to understand: less movement can lead to weight gain, weaker muscles and bones, higher blood pressure, and other issues.

But too much sitting can also put mental health at risk.

A pair of studies looked at how inactivity during the pandemic influenced the way people think, feel, and see the world. They were based on surveys of more than 3,000 people in the United States.

The first showed that people who were regularly getting the recommended 2.5 to 5 hours per week of moderate to vigorous physical activity before the pandemic saw activity levels drop by 32% right after restrictions took effect.

A follow-up study was completed a few months later, where participants completed weekly surveys between April and June 2020. Overall, most people saw improvements in their mental health.

However, some did not. Those that didn’t get back to movement and stayed sedentary reported their depressive symptoms did not recover.

Physical activity and sitting time are closely associated with mood and mental health. When people spend a lot of time sitting and watching television, or other screens, they tend to feel worse than when they’re up and at it.

There could be a variety of reasons for this. One is that your body is working when it’s active. Blood is flowing, oxygen is moving, and in some cases, it can even lead to feelings of euphoria.

On the other hand, your body essentially shuts down and starts working very minimally when you’re seated. The body is also crumpled up when seated, so that in and of itself may contribute to its potential emotional toll.

It’s also possible that the images people consume while seated can lead to anxiety and depression.

The study does not prove that too much sitting causes depression, but it does establish yet another link.

Try taking a couple of walks around the block each day this winter/fall to boost activity levels and maybe help relieve seasonal anxieties.