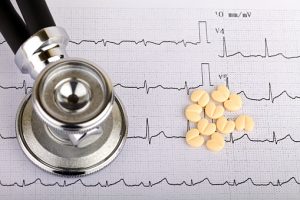 Dr. Nathan Denham from the study said, “Atrial fibrillation (AF) is the most common heart rhythm disorder and affects 1.5 to two percent of people in the developed world. AF increases the risk of stroke by five-fold. In addition, people who have strokes due to AF are more likely to die or be disabled as a result of their stroke. The risk of stroke in patients with AF can be reduced by around two-thirds with medications that thin the blood, called anticoagulants. But around a third of patients with AF have no symptoms and do not know they have AF and are at increased stroke risk.”

Pacemakers can detect asymptomatic AF but are not typically used for this purpose. The current study examined whether pacemakers could detect patients with asymptomatic AF so they could receive anticoagulants to prevent stroke.

The study consisted of 223 patients who received pacemakers within a five-year period but were not diagnosed with AF prior to implantation. Data was collected from the pacemaker to reveal how many patients were experiencing AF, and how many had episodes but then returned back to normal.

During the follow-up period at least 36 patients were detected to have AF, 27 of which were determined during routine pacemaker checks. All but one of the 27 patients required anticoagulants to prevent stroke.

Dr. Denham added, “The proportion of pacemaker patients with undiagnosed AF was higher than expected. Nearly all of them should have been receiving anticoagulation to prevent stroke. Pacemaker checks are simple to perform and our study shows that it is worthwhile using them to identify patients at risk.”
On average pacemaker checks and AF diagnosis were six months apart, only one-third of patients needed 12 months to discover they had AF. Dr. Denham said, “Stable patients have pacemaker checks every 12 months but our results support more frequent monitoring to identify AF. Otherwise patients are at increased stroke risk and are left unprotected.”

Remote telemonitoring would allow for more checks without the patient traveling to a hospital. Wireless technology would collect data and transmit it to a computer. This data then arrives at hospitals where doctors could monitor it.

Dr. Denham concluded, “Telemonitoring would identify AF much earlier so that anticoagulation could be started. The fact that we found such a high proportion of patients with AF who should have been on anticoagulation suggests that telemonitoring is worth pursuing. Although we can’t conclude this from our study, the cost of telemonitoring may be offset by the savings from preventing strokes. One-third of people with AF don’t know they have it so we need to use all of the tools available to recognize it. Our study suggests that pacemaker checks are a good way to identify new cases of AF so that anticoagulation can be started to prevent strokes.”

The study was presented at Acute Cardiovascular Care 2015.