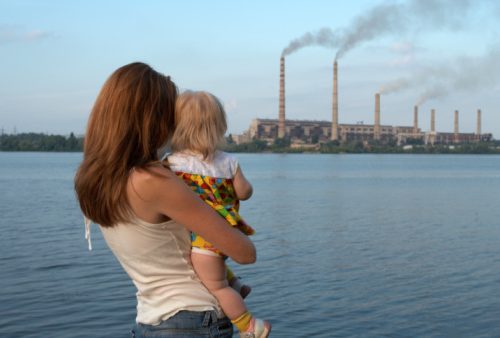 While nobody likes the stench of foul-smelling air or the uncomfortable side effects that may accompany it, the World Health Organization considers even the most undetectable forms of air pollution to be a major risk to health. Pollution has long been linked to respiratory problems, heart disease, and cancer. Recently, evidence suggests there is even a strong association between poor air quality and heart attacks and stroke.

A study led by a University of Michigan public health researcher (and supported by the University of Washington) just revealed that high concentrations of air pollution can lead to an increased thickening of the inner two layers of the carotid artery. These are two very important blood vessels that supply blood to the head, neck and brain.  What this means is that long-term exposure to air pollution hardens these arteries, which in turn, leads to heart attack and stroke. The research team also determined that a reduction in exposure to pollution over a period of time meant a slower progression of blood vessel thickness. The thickness of blood vessels in human arteries shows just how much hardening exists in the body, even in those who don’t seem to have any obvious signs or symptoms of heart disease.

Researchers monitored over five thousand citizens from six different U.S cities. They took age and lifestyle into consideration and measured air pollution levels inside of the participant’s houses. They were shocked to find that people who were exposed to high levels of pollution were more likely to suffer a heart attack or stroke. The participants in this study were monitored over three years, and will continue to be monitored for seven more years. This will help researchers distinguish between cases of clinical heart disease and heart disease cases caused by long-term exposure to pollution.

The authors of this latest study say their findings help the scientific community further the understanding of how air pollution may cause increases in heart disease, heart attack, and stroke.


Even Moderate Pollution is Linked to Heart Attack and Stroke

In the last year, the results of a decade long study were published in the Archives of Internal Medicine linking moderate air pollution to an increase in the risk of stroke. Stroke is the leading cause of long-term disability in the United States. This study, conducted in Boston, concluded that even moderate exposure to pollution increases the risk of stroke by as much as 34 percent.

Almost two thousand hospital patients treated for stroke were examined for this study. The onset of stroke symptoms in patients was matched with hourly measurements of air pollution near their homes. The research team was able to determine that peak pollution exposure for stroke patients consistently occurred 12 to 14 hours before the onset of the stroke. The study also determined that black carbon and nitrogen dioxide, both associated with automobile traffic, were heavily linked with stroke risk.  Since the moderate pollution testing was only conducted in Boston, which is considered to be fairly clean, the researchers promote the need for similar studies to be carried out in other U.S cities.

The Air Quality in Your Community – What To Look For

The air quality index tells you how clean or unclean your air is, and what health concerns are associated with different levels of pollution, including heart disease and stroke. In the United States, the Environmental Protection Agency (EPA) sets the daily air quality index, represented by six color levels. The most common are green (good), yellow (moderate), and orange (unhealthy for sensitive groups). On rare occasions, the air quality has been listed as red, which is unhealthy for most citizens. If you already have an existing health condition, it is best to avoid going outside on orange or red days.