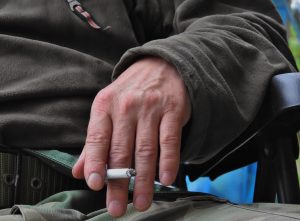 In a recent study involving smokers with chronic obstructive pulmonary disease (COPD), researchers observed that middle-aged and elderly men were at a higher risk of developing low bone density, osteoporosis, and vertebrae fractures than their women counterparts.

The study, published online in the Annals of the American Thoracic Society, used smoking history and COPD as independent risk factors for low bone density in both men and women.

In the U.S., COPD is the third leading cause of death and almost half the people over 45 are either current smokers or ex-smokers.

As part of the study, researchers from National Jewish Health and other institutions evaluated 3,321 current and ex-smokers. The participants were aged between 45 years and 80 years, and had a minimum of 10 pack-years of smoking history. The researchers used quantitative computerized tomography to assess the bone density of the participants.

The study also revealed that thirty-seven percent of the participants had one or more fractures of their vertebrae.

The interesting finding was that among the people with low bone density, 55 percent were men, and among these men 60 percent suffered vertebral fractures.

Not surprisingly, the low-bone density incidence was directly proportional to the worsening COPD. In fact, in people with severe COPD (both men and women), the percentage of low bone density was as high as 84 percent. While there is no real clarity on how COPD causes osteoporosis, the fact that it does is evident from the following numbers.


Effects of smoking on bone health

According to Dr. Primal Kaur, an osteoporosis specialist at Temple University Health System in Philadelphia, the teenage years and twenties are prime time for building bone mass. Smoking during these crucial years will limit the formation of the maximum bone mass, and a smoker will end up with a smaller skeleton and lesser bone mass, compared to a nonsmoker.

The nicotine and toxins in cigarettes damage bone health from different angles. The smoke from cigarettes generates huge amounts of free radicals that attack and overwhelm the body’s natural defenses. This results in a chain reaction of damage throughout the body – right from the cells and tissues all the way up to the vital organs.

Another thing that toxins tend to do is upset the estrogen levels, which bones need to stay healthy. And because of the toxins, your liver produces more estrogen-destroying enzymes. As a result, your bones become porous and weak.
Smoking also plays havoc with the action of the hormone calcitonin, which helps build bone. As this important hormone cannot do its job smoothly, it impacts new bone formation.

Because of all these reasons and more, Dr. Kaur feels that smokers have twice the risk of having a fracture than non-smokers.

According to Dr. Elizabeth Regan, an assistant professor of medicine at National Jewish Health, the current health guidelines do not recommend osteoporosis screening for men. Even though current smoking is a recognized risk factor for osteoporosis, current screenings do not take either smoking history or COPD as criteria for low bone density.

Being aware of the high cost of CT scanning, Dr. Regan suggests when using the CT scans recommended to screen heavy smokers for lung cancer to also screen them for bone density.

The team believes that based on their findings, current smokers and past smokers of both genders should be screened for osteoporosis.

Not screening heavy smokers for bone density levels is a clear example of being penny wise and pound foolish. By accepting the smoking and osteoporosis risk, by diagnosing osteoporosis in its early stages, and by starting early treatment, we can do our part in preventing fractures, improving quality of life, and also reducing healthcare costs in the long run.