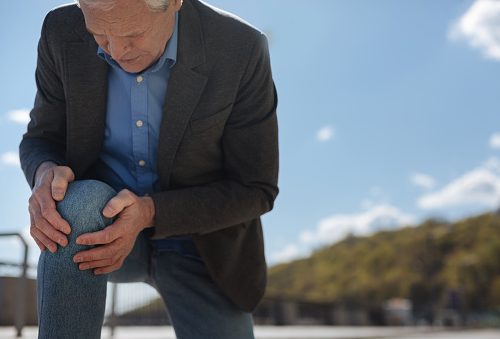 The knee joint is arguably the most important joint in the body. It bears much of our weight, allows us to walk and climb stairs, and prevents us from losing our balance. This dependence on the knee leads it to be commonly affected by mechanical injury. Torn cartilage or ligaments by direct injury or knees ravaged by osteoarthritis over time lead to pain and disability requiring treatment.

Surgery is often the most effective cure, with opioid painkillers prescribed to control pain. However, new research suggests that taking these powerful medications could increase pain later in the course of their disability.

Osteoarthritis is the most common form of arthritis and affects millions of people around the world. It occurs when the protective cartilage at the end of joint bones, such as in the knee, become worn out. This leads to bone on bone friction, resulting in pain, tenderness, and stiffness in the affected joint. Considering osteoarthritis is mostly an age-related condition, not much can be done to prevent it. Non-surgical treatments such as physical therapy, injections, and pain killers are often tried before joint replacement surgery.

The study in question looked at 156 patients who had total knee replacement. The average age of these individuals was 66, with 23 percent of them receiving at least one opioid prescription before their surgery.

It was discovered those who used opioids prior to knee replacement surgery had about nine percent less pain relief six months after. The researchers found that quite interesting, but are not sure why this phenomenon was observed. It is possible that prior use of opioid medication leads to an increased sensitivity to pain, but no definitive reasoning was discovered.

“Although each patient case is different, patients and physicians should discuss the potential impact of using opioids in patients with knee osteoarthritis who are likely to consider total knee replacement within the next two years,” said lead author Elena Losina, co-director of the Orthopedic and Arthritis Center for Outcomes Research at Brigham and Women’s Hospital in Boston.

There are over $1.5 billion dollars spent on opioid medications in the U.S. for osteoarthritic knee patients alone every year. It is estimated that nearly 40 percent of Medicare patients with knee osteoarthritis received at least one opioid prescription as of 2009. The researchers hope that this study will encourage physicians to talk to their patients about the long-term complications of opioids.