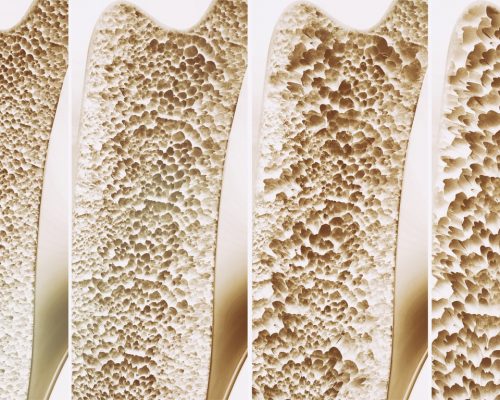 If you’re over the age of 50, then you’re at a higher risk of bone loss, especially if you’re a woman. As bone density loss increases, bones become weaker and increase the risk of fractures. Although there are treatments for osteoporosis, many patients don’t adhere to their medications due to fear of adverse effects, which causes bones to still become weaker.

Research suggests that within mice, the gut microbiome modulates bone homeostatic by regulating osteoclast formation and immune system function. The human gut is comprised of trillions of microbial cells, which have been shown to play an important role in several different physiologic functions. When this microbiome is disrupted, it can contribute to disease and illness.

One microbiome found in the gut is Lactobacillus reuteri, which has been found to have several benefits along with anti-inflammatory properties. In mice with active inflammation, supplementation of Lactobacillus reuteri increased trabecular bone density along with reducing ovariectomy-induced bone loss. Until now, this type of supplementation and its effects on humans have been unknown.

The recent study looked at older women and wanted to uncover if lactobacillus reuteri could help protect bones. The study was a 12-month, randomized, double-blind, placebo-controlled trial conducted in a health center in Sweden. The women recruited were 75 to 80 years of age and had a T-score of -1 standard deviation or less for bone mineral density in the spine, hip, or femoral neck. Patients were excluded from the study if they already had osteoporosis, certain comorbidities, or took antibiotics in the last two months.

Patients either received a lactobacillus supplement or a placebo. Bone mineral density was analyzed at baseline and at 12 months.