Home » Health News » One in five over 65 consuming alcohol unsafely 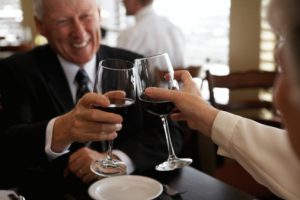 A new study from King’s College London has found that one in five seniors over 65 who consume alcohol do so at unsafe levels. These seniors were also found to be of higher socioeconomic status.

The National Institute on Aging states that with time, drinking can lead to liver damage, immune system disorder, worsen conditions like osteoporosis and lead to confusion and temporary memory loss which can be confused with dementia. They stress that alcohol consumption, particularly in seniors, is concerning due to the variety of medications taken by this demographic which can react negatively with alcohol. This can lead to increased side effects, complications and even accidental death.

For the study researchers used anonymized electronic doctor records of 27,991 seniors aged 65 and up who lived in London. Of the study group 9,248 reported consuming alcohol and 1,980 did so at unsafe levels.

Those who consumed alcohol at unsafe levels were typically male, younger and of a higher socioeconomic status. Additionally, big drinkers were more likely to be Caucasian or Irish, and those of Caribbean, African or Asian ethnicities were less likely to drink.

Lead author of the study Dr. Tony Rao commented, “As the Baby Boomer generation become seniors, they represent an ever increasing population of older people drinking at levels that pose a risk to their health. This study shows the need for greater awareness of the potential for alcohol related harm in older people, particularly those of higher socio-economic status, who may suffer the consequences of ill health from alcohol at an earlier age than those in previous generations.”

Study author Dr. Mark Ashworth added, “This research highlights that as GPs we need be more aware of the risk of older people, especially men, drinking excessively. Reducing alcohol misuse is important to prevent premature death and serious negative health effects, such as alcoholic liver disease, which are big burdens on our health system. Alcohol excess carries additional risks in the older population such as falls and confusion.”

Although the authors feel that more attention must be paid to seniors and alcohol consumption, they do recognize that their findings may not reflect all over London. Even if their sample group was more diverse there could be an under-reported amount of seniors who consume alcohol.

The findings were published in BMJ Open.