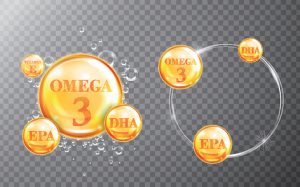 How many times have you read an article or seen a doctor on television telling you the benefits of including Omega-3 fatty acids as part of your diet? Well, there is a reason for that. New research has revealed that omega-3s may have the potential to treat serious conditions like Alzheimer’s disease, stroke, Parkinson’s, and other degenerative conditions caused by age or other illnesses.

Diet is a huge part of being able to treat and even prevent many illnesses, from the common cold to cancer. Understanding how the nutritional elements in our food work to promote health and well-being in our bodies is a huge step toward learning how we can effectively treat and prevent them through food. The key to this kind of treatment, says the researcher responsible for this new information, is early detection. The sooner someone becomes aware of a developing condition in their body, the sooner these interventions can take place and the more effective they are.

So how do omega-3s come into play? Well, “docosahexaenoic acid (DHA), a key essential Omega-3 fatty acid, produces signaling molecules called docosanoids in response to disruptions in the state of equilibrium within cells caused by injury or disease. Neuroprotectin D1 (NDP1) is a docosanoid that the Bazan lab discovered and found protects neurons by controlling which and how certain genes in the retina and brain respond.”

This new research shows that a lack of DHA in the brain may be linked to certain precursors of Alzheimer’s disease. When DHA levels are low, patients also experience neuroinflammation, dendritic spine damage, and inhibited communication between cells. When DHA is present, it is producing NDP1, which is associated with controlling inflammation and promoting cell growth and survival. Both of these are linked to maintaining homeostasis within cells.

In stroke simulations, it has been found that treating patients with NDP1 can reduce the amount of damage done by the stroke. It also helps to save the tissues surrounding the core of the stroke. During the process known as “cell death,” NDP1 inhibits the cell from passing the point at which the process becomes irreversible.

The research review discusses many of the functions of DHA and its docosanoid NDP1. It is known that the properties of these components of fatty acids offer many benefits to cells and our overall health. More research is needed to determine exactly how these fatty acids can prevent and treat chronic and severe illnesses and exactly how they should be administered in our daily diets.

Related: Alzheimer’s disease and memory loss risk may be lowered by eating baked and broiled fish