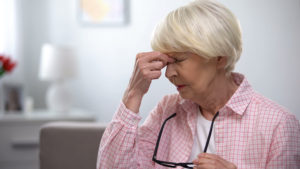 Visual impairment in older women may be associated with dementia, according to a new study published online in JAMA Ophthalmology. The findings suggest new interventions for vision improvement may be needed to help reduce the risk of mild cognitive impairment (MCI).

Dementia is an overall term for diseases and conditions characterized by a decline in memory, language, problem-solving, and other thinking skills that affect a person’s ability to perform everyday activities. Research has shown that women are at a higher risk of dementia, so preventative treatments are crucial.

Led by Elaine M. Tran of the Stanford University School of Medicine in Palo Alto, California, the study compared the likelihood of dementia or mild cognitive impairment (MCI) among older women with visual impairment. 1,061 participants took part in the study, which included 183 of whom had objective visual impairment.

Beginning in 2000, this was the first analysis based on standardized, objective, visual acuity measurements, and cognitive assessment. Post-menopausal women were selected for participation if they were concurrently enrolled in the Women’s Health Initiative (WHI) Sight Examination Study (enrollment 2000-2002) and WHI Memory Study (enrollment 1996-1998). Any patients exhibiting dementia or MCI before the study began were excluded.

Researchers relied on questionnaires to identify visual impairment in participants. Visual acuity measurements were also used with three threshold levels: 20/40 or worse, 20/80 or worse, and 20/100 or worse in at least one eye. The average follow-up after enrollment in the study was 3.8 years.

It was concluded that of the 183 women enrolled in the study with objective visual impairment, 42 were ultimately classified as probable dementia. Twenty-eight of the women were classified as MCI, which did not progress to dementia. Upon enrollment, participants who had visual impairment became associated with a twofold to more than fivefold higher risk for dementia development.

Researchers found that the risk for dementia was greatest in the group of participants with a visual acuity of 20/100 or worse, and findings were similar for the risk for MCI. Although there is no underlying mechanism specifically associating visual and cognitive impairment, the researchers note the relationship between visual and cognitive function is likely bidirectional and multifactorial.

“Regardless of mechanism—common cause, sensory deprivation, or a combination of factors—visual impairment could represent an early harbinger of risk for dementia,” the authors write. “These findings suggest a potential value for vision screening and vision-improving interventions.”

Unfortunately, the study did have limitations because of self-reporting, so researchers warn that further research is needed to fully identify those at risk for developing dementia and MCI. Until then, these results suggest interventions to improve visual acuity in older adults may be beneficial. Women have a higher rate of dementia risk compared to men of the same age, so more research about cognitive decline in women is crucial.

“Older adults who undergo cataract surgery have been suggested to have lower risk of new-onset dementia, and other studies have suggested improved cognitive scores after cataract surgery,” the researchers concluded.