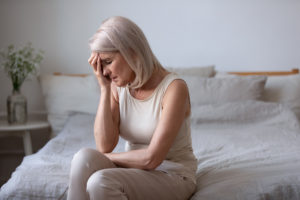 New research has found some people with certain pre-existing diseases such as dementia may be at a higher risk for COVID-19. Experts believe that those with pre-existing conditions may need special treatments and more shielding as the world starts to slowly reopen.

A research team based at the University of Exeter and the University of Connecticut in the U.S. found that older people with dementia were three times more likely to have severe COVID-19 compared to older people with no dementia. The reason for this increase in the virus is not yet know, but specials suggest it may be because of a result of greater exposure to the virus in nursing homes, or it could be caused by the disease process itself.

A higher risk of severe infection was also found among patients with pre-existing diagnoses of depression, chronic lung disease, atrial fibrillation, diabetes, or reduced kidney function. Researchers also found that heart disease and stroke were similarly common in people with and without COVID-19 after taking other factors into account, suggesting these diseases are not especially risky.

For the study, researchers used results from 448 people aged 65 to 86 years old who tested positive for COVID-19 predominantly while in hospitals, at the peak of the epidemic in England. The COVID-19 positive patients had taken part in the UK Biobank study, and the research team compared their health histories with data from more than 250,000 other older people in the study.

It was found that older men were at 80 percent higher risk than older women to have a more severe case of COVID-19, but it was not due to them having more pre-existing conditions. Older people who were also black were three times more likely to be affected than white and less socially privileged older people.

The study focused primarily on common conditions in older people. However, this isn’t to say that the same risks don’t apply in younger groups, or groups with special health issues. including those with impaired immune systems.

Professor David Melzer, who led the team, said: “These initial results suggest that some risky pre-existing diseases in older people may have been overlooked, especially dementia, depression, atrial fibrillation and pre-existing kidney disease. Our findings should help stimulate COVID-19 research on the special needs of older patients with these high-risk conditions. The findings may also have implications for how the current isolation of older people could be managed as the epidemic recedes. A more precision approach may be possible, given the different risks that different older people face.”

The results of studies such as this one are valuable resources for doctors. As initial analyses have shown that some specific pre-existing conditions are disproportionally common in older adults who develop severe COVID-19, more information is needed to find the exact implications for policy makers during future phases of the outbreak.