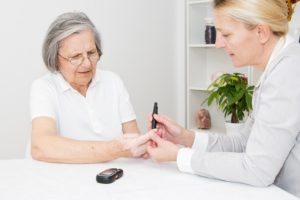 Current research reports that only one in every three American seniors have their diabetes under control, according to John Hopkins University Bloomberg School of Public Health.

The American Diabetes Association (ADA) has set guidelines for controlling diabetes, which some experts suggest may be too difficult for older Americans to follow. Researchers, though, found that even with less stringent guidelines, older adults are still not managing their diabetes well.

Researchers said this suggests a need for better support system to help those over 65 to manage their diabetes. But the debate over diabetes targets, especially glucose control, might be hindering progress.

“Are some older adults being over-treated? Are some being undertreated? These are questions for which we don’t have answers,” said Elizabeth Selvin, a professor of epidemiology at the Bloomberg School.

The research team examined data taken from the Atherosclerosis Risk in Communities Study. This group consisted of 15,792 middle-aged individuals. Selvin and her team looked at data from 1,574 participants between 2011 and 2013.

By using three main criteria – hemoglobin A1C (measurement of blood glucose levels), blood pressure and cholesterol numbers – the researchers could determine if the participants had proper maintenance over their diabetes in coherence with guidelines set by the ADA.

Researchers suggest poor diabetes control could be a priority problem. They said seniors experience other illnesses, which require more immediate attention than diabetes. But by not properly controlling diabetes, other health risks can develop such as kidney disease, nerve damage and even blindness.

The study was published in Diabetes Care.