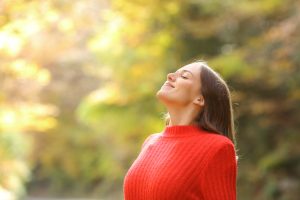 Mental health can affect how we think, feel, and cope with life. It can also help determine how we handle stress, relate to others, and make choices. So, maintaining mental health is crucial to stabilizing constructive behaviors, emotions, and thoughts.

A new study is helping to outline a new way to help foster mental health through the aging process. Researchers from the University of Maine suggest that aging adults with high levels of “trait mindfulness,” or a person’s ability to pay attention to the present moment without judgment, showed greater well-being and mental health. Adults who also demonstrated mindfulness were found to be more mentally resilient to stressful situations.

The study included 121 adults between the ages of 55 and 87. All were evaluated for their levels of trait mindfulness using the scientifically validated Mindful Attention Awareness Scale.

All participants were given various psychological tasks to gauge their levels of executive function, a set of mental skills that allow individuals to plan, track, and achieve their goals. This includes working memory, switching back and forth between tasks, and filtering out irrelevant information. Participants’ psychological resilience and emotional response to stressful situations were also measured.

It was concluded that subjects with higher levels of trait mindfulness were generally older, more educated, and exhibited less stress, depression, and anxiety. Researchers also found that trait mindfulness was tied to better inhibitory control, the subjects’ ability to focus their attention and filter out irrelevant information during tasks. Overall, researchers found that the harmful effects of stress were significantly reduced in those who were higher in mindfulness.

This study raises the possibility of mindfulness as an intervention to help reduce the harmful impact of stress-related negative effects on brain health in older adults. The next step for researchers is to adapt mindfulness practices for a socioeconomically diverse older population to see if it has the same relationships with brain health and well-being.

Caring for mental health and brain function is vital at any age. Though some degree of cognitive decline is nearly inevitable as you age, numerous factors can take a toll on the ability of the brain to function at its peak potential. The brain can be under constant attack from stress and environmental factors, affecting concentration, memory, and overall cognitive function.

The Smart Pill has a unique formula that can help to support, nourish, and maximize brain health in cognitive function. Its nine ingredients include ginkgo Biloba, huperzine A, bacopa extract, rosemary extract, and a B vitamin complex. These ingredients allow The Smart Pill to help boost circulation, provide nutritional support, and fight free radicals.

As physical health and mental health become an important issue in the United States, it is essential to take the necessary steps to keep the brain and body healthy. By practicing mindfulness, getting plenty of exercise, and ensuring the intake of proper vitamins and nutrients, you can help the body and mind stay healthy through the aging process.